I had my seventh session with Trevor on Sunday morning. I started with a 5-minute warm-up on the cross-trainer. He asked me how I was feeling and what I’d had for breakfast. I told him I’d decided to switch my breakfast as the porridge was making me feel heavy and bloated. I told him I’d had a banana and a cup of tea for breakfast. And then I did the following circuit:

I did that circuit three times. I couldn’t find a video of the combined pelvic lift/skull crushers. I lay on the floor, knees bent and raised my hips. I then did one skull crusher while my hips were raised. I lowered my hips, raised them and did another skull crusher. And so on. For the cardio, I used the bike in the first set (resistance 7), treadmill in the second set (speed of 6.0 km/h with a 3% incline) and the cross-trainer in the last set.

I then did an abs circuit:

I did that circuit twice. The hardest exercise in that circuit was the lower back extensions. Even the plank hip twists weren’t too bad and Trevor asked me to increase it in the second set. After that I did some stretching and I was done.

I woke up on Monday with very sore obliques! I thought my legs would ache as much of the session with Trevor the day before had been focused on my legs – but no, the obliques was where I felt it the most.

I had my eighth session with Trevor on Thursday morning. I did my 5-minute warm-up on the cross-trainer and then did the following circuit:

During the 4 minutes on the treadmill I walked at a speed of 5.5 km/h. After 1 minute I increased the incline to 4% for the remaining 3 minutes. I did that circuit twice and had a short break. I remembered later that in the first set Trevor made me do an exercise: a squat with 3-kg weights jabbing twice as I went up and down – 15 times. It hurt my shoulders and my legs and I hated it. I’m not sure whether he forgot about it during the second set, but I certainly did!

I then did a 4-minute Tabata circuit.

I did that twice – so 8 minutes in total – and it was hard! The 10 seconds of ‘rest’ is barely enough time to get ready for the next exercise and I barely caught my breath. Trevor asked me which hurt more – my abs or my legs? I told him my abs ached when I was in the plank position but I could hold it. During the wall squat, however, I could feel myself inching up against the wall trying to lessen the pain! He told me we’d focus more on my legs – doing more squats and lunges. Hurrah (not)!

After the Tabata circuit I spent 5 minutes on the cross-trainer at resistance 8 and then I did some exercises for my glutes:

Trevor told me my stomach looked flatter than the last time he saw me. I told him that a woman at the salon also told me I looked like I’d lost weight. So something is working!

I was supposed to do another 20/20/20 workout on Saturday morning but was so exhausted from the week/weekend that I stayed in bed until 12.30pm and then went out for lunch.

Low point of the week? I was out for drinks/dinner on Tuesday, Wednesday and Thursday. I was also out for brunch on Friday – which started at 2pm and we didn’t finish until 9.30pm. We drank all day. Wine, vodka and champagne – and a couple of shots too.

High point of the week? In spite of all the eating and drinking I do look like I’ve lost some weight!

Weight loss? I managed to stay at or under 75 kg for most of the week. 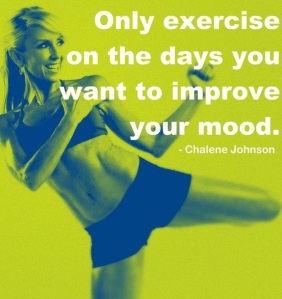