I didn’t go to the gym on Sunday because I was in Abu Dhabi for a wedding. I stayed up all night with a few friends, we went to breakfast at 8.30am and I didn’t get to bed until 10am. So I was shattered.

I had a session with Pete on Monday morning, which I probably should have cancelled because I really was in no state to do anything. My feet hurt and I felt so sluggish. I was so relieved when he told me my warmup would be an uphill walk on the treadmill instead of a 1 km run. Or perhaps he took one look at me and realised I might start crying if he told me to run! So, I did a 10-minute uphill walk, starting with a 1% incline and increasing it each minute until I was at a 10% incline. I did a few stretches and Pete told me I’d be lifting heavy weights in our session. The first superset consisted of:

Instead of a proper rest after the three sets, I did an abs circuit:

What a long abs circuit! I could really feel my abs as I was getting to the end of the circuit. I had some water and did the next superset:

I repeated the same abs circuit as before (my abs were burning by this stage) and then had some water. The next group of exercises consisted of:

I did another abs circuit (my abs were on fire at this point) and finished off with some stretches.

I woke up on Tuesday with really sore abs. I was also still exhausted after the weekend and decided to stay in bed and sleep.

I had a session with Pete on Wednesday morning. This time I did have to do a 1 km run as a warmup followed by some stretches. I didn’t do the usual stretching routine though – I did some very different ones:

There were a couple of other stretches but I can’t remember them. I had some water and then did the following circuit:

Gosh, it was complicated! The quad roll started in child’s pose with my arms stretched in front of me – and I had to roll forward until I was almost in a plank position and then back again, ten times. The stretch at the end consisted of a routine of several different stretches, which I can’t remember! I did that circuit three times, with a 30-second break in between each set.

I then did a series of back and leg stretches followed by an abs circuit:

Thankfully I only had to do that once! I did some stretches after that and was done.

I didn’t work out again in the week or over the weekend.

Total distance covered this week? 1 km – and that was my warmup for my session with Pete!

Weight loss? I put on 1 kg while I was in Abu Dhabi! Thankfully I lost it as the week went on… 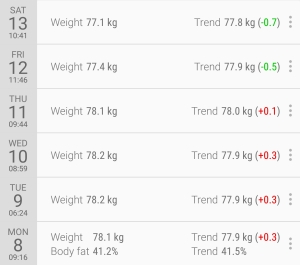