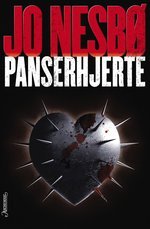 (I couldn’t find a good English cover.)
By the same author as The Snowman, this book is the sixth book to feature the alcoholic detective Harry Hole. The Leopard picks up soon after The Snowman ended – it starts off in the alleys of Hong Kong, where an opium-addicted Harry is found and brought back to Norway to help investigate a series of murders involving a Leopold’s Apple: an apparently fictional spherical device which is placed in the victim’s mouth – it contains 24 sharp spikes which shoot outward when activated. The investigation takes Harry through avalanches in Norway, volcanoes in the Congo, and a new love interest, all while his father is battling cancer in hospital…
This book is as gripping as The Snowman and Harry comes across as a more complex and pensive character than he did in the previous book (I have to admit I haven’t read the others – yet). I didn’t find it as frightening as The Snowman (I could read this at night!) but there were some parts I found disturbing, particularly the descriptions of the Congo and its victims of war. There are some images I just can’t get out of my head which really have nothing to do with the main plot… It’s a very well-researched thriller.
I recommended The Snowman to my friend Kiran – you can read her review here… And I’m recommending she read this one too…
The next book in the Harry Hole series will be published in Spring 2012 – I hope to have caught up with the other four by then!
So that’s 10 books done so far in 2011 – 10 to go.

One thought on “Review: The Leopard”