We were quite exhausted after our first day in Barcelona so we decided to have a lie-in on Saturday morning and meet for breakfast at 10.30. Which really meant 11. Which meant we didn’t leave the hotel until 11.45. Later than I would have liked, but there you go. 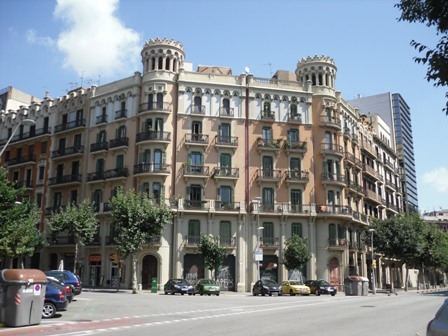 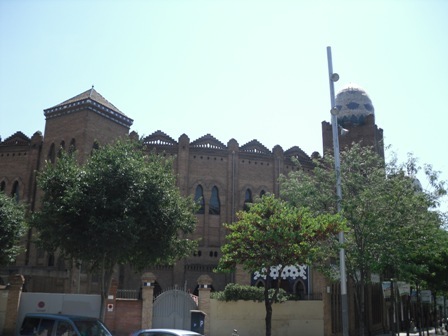 And then there it was…

We could see it in the distance, with the cranes around it, still working on it.

Construction of Sagrada Familia began in 1882 and is still incomplete. Gaudi devoted his life to this project but when he died in 1926, less than one-quarter of the church was complete. Progress was slow as it relied on private donations and it was interrupted by the Spanish Civil War. Construction was resumed in the 1950s and progress was still slow. There is now an entrance fee to see the church and it is estimated that it will finally be finished by 2030. Once the spires are complete, Sagrada Familia will be the tallest church building in the world.

A sad story – in 1926, Gaudi was knocked over by a tram, and nobody came to his aid as they didn’t recognise the city’s most famous architect. They assumed he was a beggar because of his worn-out clothes and neglected appearance. A policeman took him to hospital and it was only on the following day that the chaplain of Sagrada Familia recognised him, but by then it was too late.

The queue to get into Sagrada Familia went all the way around the block so we didn’t get a chance to see the inside. (Tip: Get there early if you want to see the inside – or book your tickets online!)

Of course the hundreds of tourists in the area also attracts some weird entertainment: 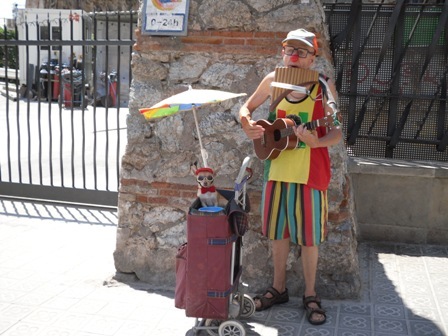 I wasn’t even sure the dog was real as it barely moved.

After looking at the church from every angle on the outside, we decided to head to lunch. I’d booked a restaurant called Agua in the Port Olimpic area which was on the beach. We sat outside, under the shade, enjoying the view, the breeze and the good food…

After lunch, we decided to split up – some wanted to shop, some wanted to sightsee – so three of us headed to the Picasso Museum which was very near the Gothic Quarter where we were the day before. I had no idea that Picasso had created a series based on Velazquez’s painting Las Meninas until the previous day and I wanted to see it, the original Las Meninas being one of my favourite paintings: 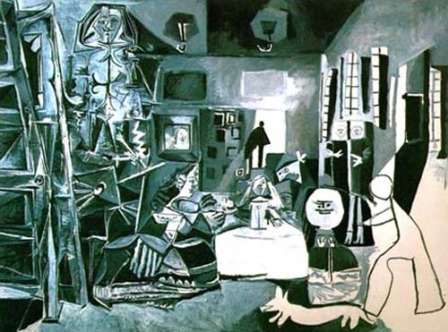 After the museum, we walked through the Gothic Quarter and down La Rambla for a while. We met up with the two shoppers outside the cathedral and were met with the sight of dozens of men and women dancing in the square with live musicians playing music. The sardana is a circle dance and people dance in the squares on weekends…

After watching the sardanistes for a while, we walked back to a quiet square for some more tapas.

Again, we intended to order some light snacks, but it just didn’t happen!

By the time we got back to the hotel it was 9pm (long story – lost little Italian boy on La Rambla followed by an idiot cab driver) so I changed our dinner reservation to 11.30 (which seems to be the normal time to eat in Spain)…

I’d booked dinner at La Barceloneta in the Port Olimpic area. The outside of the restaurant looked like a ship – and the seafood was excellent. I had the baked cod with garlic and paprika – which was excellent. We also had two bottles of rosé (also excellent)… After dinner we started walking towards the area we had lunch in, where all the clubs are. The staff at the restaurant told us it would take 10 minutes. Fifteen minutes later we were still walking and I could see where we had to get to – and it would have taken us an hour to get there! At that moment, two rickshaws pulled up and offered to take us to the clubs. I don’t know what we’d have done without them – our feet were killing us! Another 15 minutes later, we pulled up outside a couple of clubs and decided to go to CDLC – it had the shortest queue. We ordered some drinks (they’re very generous with their vodka), danced a bit, and managed to find a table outside. What I did find funny was that one of the dancers on the podium managed to look utterly bored while dancing – and every few minutes she would turn around and lean over, but still moving half-heartedly. We couldn’t figure out what she was doing, but then caught a glimpse of her checking her phone which she’d hidden in a vase behind her!

The bar closed at 4am and we were the last to leave. Unfortunately all the other bars in the area closed at the same time and trying to find a cab was a complete pain in the ass. It took us an hour – and that was only after we’d enlisted the help of the concierge at the nearby Hotel Arts. Initially he said he couldn’t help us as we weren’t staying at the hotel – and it was only after we told him a friend’s foot was bleeding that he agreed to help us! We eventually dragged ourselves into our hotel at 5.15 – already dreading having to check out at noon, just a few hours away!

Read about our first and third days in Barcelona…