On Day 3 (Tuesday) I decided to try out the gym in our building. It’s in the same complex but you have to collect an access card from reception and walk across to the car park. The pool and gym are on the top floor/roof of that building. When I got to the sixth floor, I couldn’t figure out how to use the access card. The machine on the wall had a number pad and I had a card that (I thought) needed swiping. There was an office across the hallway so I went in and asked if anyone knew how to get to the pool/gym area? One of the guys came out to help me – he tried holding the card against the machine but nothing happened so he punched in a code and let me in.

There was an entrance to the pool, a door which said ‘Aerobics’ (I didn’t go in), and the gym. I wasn’t sure what to expect but I think there’s enough equipment there to keep me busy! It’s not the most up-to-date equipment I’ve used but it’ll do. 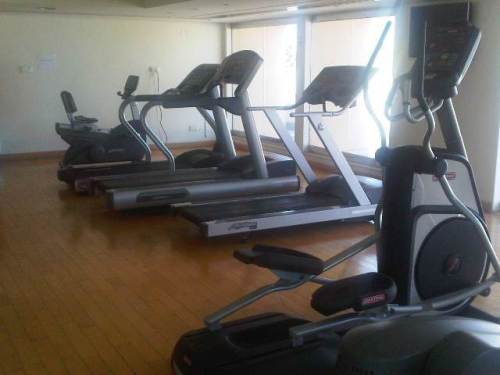 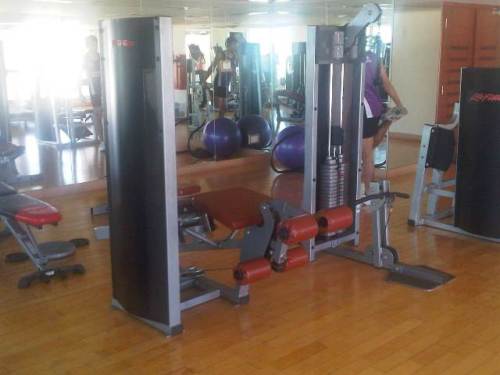 I usually use the bike but I had another ‘blonde’ moment and couldn’t figure out how to use it. I started pedalling and followed the instructions but the machine didn’t start. So I decided to use the treadmill. A few minutes later a guy came in, sat down on the bike, started pedalling and it worked – eh?). Anyway, when I pressed ‘start’ on the treadmill, cold air started coming out of the top of the display. I’ve never seen or even heard of treadmills with fans before! I also bumped into someone I know, who also lives in the building, but apart from that it was very quiet. No people-watching, no music, no screens to watch the news on… Very different to LA Fitness! So I watched the poolside (which looks much nicer from pool level than from up above). I did some weights, some lunges (yes, lunges!) and some stretches and went back home. On my way out of the gym, I tried holding the access card against the number pad on the machine. And it worked.

My brother-in-law hired a car and driver after lunch and we drove to Sharjah. The plan was to go to the Arabia Wildlife Centre and show Vinay some animals. It took us about an hour to get there and when we finally arrived, the couple outside the Centre told us it was closed. WTF? After all that! And that meant the Children’s Farm next door was closed too. Hmm – someone didn’t read the website properly. So we piled back into the car and Googled other things to do in the area. The driver must have thought we were morons. The Sharjah Aquarium? Yes, we’ll go there! It took us another 30 minutes or so to get there and when we did it looked like the building was closed – it was under scaffolding and looked like it was being renovated. Thankfully, it wasn’t and we went in. It cost AED20 (approximately £3.50) per person.

The aquarium was interesting – they had a variety of aquatic life on display. The only thing I’d complain about was that at every exhibit they had touch screens where you could find out more about the creatures in the exhibit but none of them worked. Each time I clicked on the screen, it would bring up starfish and other ‘harbour’ creatures, but nothing about the sharks that were in the tank.

We got to walk through an underwater tunnel where stingrays and other big fish were swimming around, but I have no idea what they were. It was interesting nevertheless.

After the aquarium, Vinay played in the children’s area outside. He loved going down the slide and did it over and over again with a huge grin on his face.

The drive home didn’t take as long as the drive there and we were home in time to see the sunset (ignore the streaky windows!). 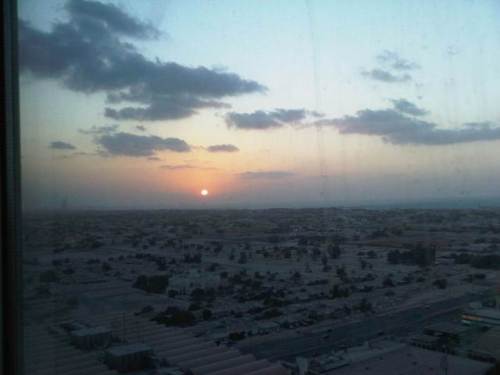 My dad finally got me a du SIM card – I put it in my phone and nothing happened. He told me to wait an hour or so and it would start working. About two hours later, the only things working were the phone and Twitter. And really, who uses the phone any more? My BlackBerry service wasn’t up and running yet so I wasn’t getting any emails or BB messages. It’s shocking how much I rely on my phone!

That night, my sister, brother-in-law and I went out for steak. We went to The Meat Co in Souk Al Bahar at the Dubai Mall. We sat indoors as it was quite cool outside. After we ordered the waiter brought over some bread – a chocolate and cranberry loaf and an onion loaf. It looked so good.

The two of them had some bread and butter, and by the time the real food arrived I was too hungry to take any photos… I had calamari and they had bruschetta to start, and we each ordered a steak. I had the USA Black Angus 160 Day Grain-fed Cut steak, they both had the Brazilian Grass-fed Beef. I asked for a salad instead of the fries that came with the steak. The other two rolled their eyes. We also ordered some broccoli and spinach as side dishes. And a bottle of red wine, which soon became two bottles…

We were home soon after 11pm – it had been a long day!