Friday again! It was my last weekend in London and I intended to make the most of it.

I met up with a friend at Raoul’s – I hadn’t seen him at all during my trip so it was nice to finally see him before I left. I had the ham and cheese omelette which was so good.

That evening one of the boys took me out for drinks and dinner (and more drinks). We started off at the Soho Hotel with some cocktails. We then walked to Escortikov Novikov for dinner and drinks. I didn’t think there was as much flesh on show as the week before. Of course it could just be that we weren’t sitting in a table located as centrally as the week before. We had lots of sushi, new style salmon sashimi, some kind of mushroom dumpling, yellowtail sashimi, and rock shrimp. I think that was it… We ordered our dessert at the bar downstairs – three flavours of crème brûlée. At about midnight we thought it would be a good idea to leave Novikov and go across the road to Nobu Berkeley. Actually, it was my idea. I take full responsibility. I also thought it would be a good idea to switch from vodka to sake. As far as I remember, we had two bamboo sakes – and I don’t know what time I got home. It was one of my favourite nights in London.

The next morning, however, was not one of my favourite mornings in London. I woke up, got ready and got on the tube to meet the girls for brunch at Raoul’s. I thought about ordering the ham and cheese omelette again but then decided it would be pathetic to have the same thing. So I ordered the bacon, cheese and tomato omelette. It was probably the most disappointing thing I’ve ever eaten at Raoul’s. As it was my last brunch we ordered the French toast to share. It more than made up for the awful omelette. We went over to Baker & Spice for a little while and said our goodbyes.

The sun had come out by this time so I decided to walk home through the park again. It was warm – and the park was crowded. 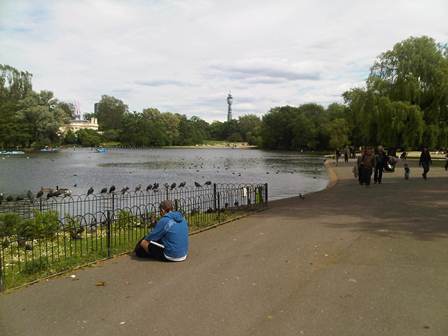 As soon as I got home my friend said she was going to Marylebone High Street – so I joined her. We went to a few of the shops and then went to Patisserie Valerie for coffee. Before we started going to Raoul’s (whatever year that was) the girls and I used to go to Patisserie Valerie for brunch on Saturdays. I’m so glad we no longer go there because it’s quite terrible. I ordered a caffé frappé which was just disgusting. I really wasn’t having much luck that day. What I really wanted was a mocha light from Starbucks. We went home after that and decided where to go for dinner. My friends had an event to attend and I had some friends to meet at a pub so we decided we’d reconvene at 9pm.

I got ready and met my friends from New York at the Punch Bowl, a pub in Mayfair. I’d never been there but the menu looked interesting. If I was still in London I’d have eaten there by now. We spent about an hour together and I left to join my friends at Bar Boulud in Knightsbridge. Four of us shared the charcuterie board, the boudin blanc sausage, and the escargots. We each had our own main course – I ordered the steak. With truffled mashed potato. Well, it was my last weekend! For dessert I went for the cheese platter while the others wanted something chocolatey.

After dinner I’d arranged to meet my friend from the night before at the Arts Club. He was with some of his uni friends and they had a table in the club downstairs. My friends and I went up to the bar on the first floor to have a drink while we waited for them, but it was so crowded we decided to have a drink in the restaurant bar on the ground floor. When my friend showed up we went down to the club.

There was a live band downstairs – I thought they were OK until they played their last song. They played ‘Purple Rain’ which has one of the best guitar solos ever – and they completely butchered it. If you can’t play it like it should be played, just don’t. When they finished, this geeky looking DJ came on. He looked about 15 years old – but once he started he was so into what he was doing, so passionate, by the end of the evening I wanted to adopt him. I would go back just for him. I didn’t think it would be a late night but of course we stayed until the end! I got home at about 3.30.

We had an impromptu lunch at Yauatcha on Sunday. And we were there just after midday. I know you’re wondering when I slept while I was in London and the answer to that is, I didn’t. We had: prawn and chive dumplings, char siu pau, scallop shiu mai, siew long buns, sticky rice in lotus leaf, mushroom cheung fun, venison puff and turnip cake. Fantastic. Dim sum and diet Coke – perfect food after a late night.

After lunch, I looked at my shopping list and realised I hadn’t bought half the things I was supposed to have (jeans, bras, swimsuit) so I went shopping. I couldn’t find any jeans I liked, I didn’t see a swimsuit I liked, I got measured for new bras but couldn’t find many in my new size. Oh well. That’s what online shopping is for!

I went over to see a friend and his daughter and had coffee at their place that afternoon. When I left I decided to walk home through the park again – I knew it would be the last time for a while and I felt sad.

I got home, started packing and stayed in that evening. We were all exhausted.

I stayed in bed as long as I possibly could on Monday. I knew that once my day started it would fly by and before I knew it I’d be on the flight home. I went to see my tarot reader in the morning – not for a reading, but because I’d promised her daughter she could have my old Yamaha keyboard and it had been on my mind for the last two weeks. I’ve known her for 12 years and we had a coffee together while we talked. After that I went to the Fromagerie for lunch with a friend. I had the slow roast pork belly with mash. My last meal in London had to be pork!

I popped into my office after lunch to say bye to my work friends, headed home to finish packing, and then I was off to the airport.

Leaving London the second time was harder than I thought it would be. It rained all day on Monday – and just as well because if it had been sunny I would have probably stayed! I felt a bit teary in the cab on the way to the airport, driving out of London. I checked in my bags and met up with a friend who was flying to Lagos that evening. He was going to the Virgin Clubhouse so he took me in as his guest. We had a drink (diet Coke) and some food (cheese and charcuterie) and then I had to go.

I got on the plane, put my trolley bag in the overhead locker and sat down. I made a few calls but got mostly voicemail. And when I switched off my phone, I cried. I cried for many reasons and I don’t think being tired helped at all. I am grateful to the lady sitting next to me for leaving me alone and not asking me if I was OK. I was fine once we’d taken off and the drinks trolley was coming round (I had tomato juice, in case you were wondering).

So, that was my fantastic, but hectic, holiday.

High points? Being with my friends. Not having to have the ‘Dubai’ conversation over and over again (How long have you been here? Where did you move from? What do you do? Where do you live?). Walking in the park – simple pleasures.

Low points? Rain. Lack of sleep (entirely my fault). Oslo. Not spending enough time with the people I wante
d to.

Regrets? One or two, but mostly that I didn’t take my DSLR camera with me. Next time…