Time here seems to fly by!

We moved to our newer villa on Sunday. It had three full bedrooms (preferable to the converted pool house my sister (A) and her son and nanny had been sleeping in the two previous nights!). 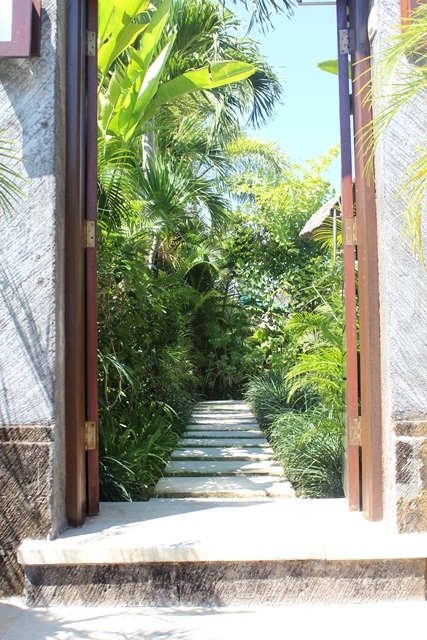 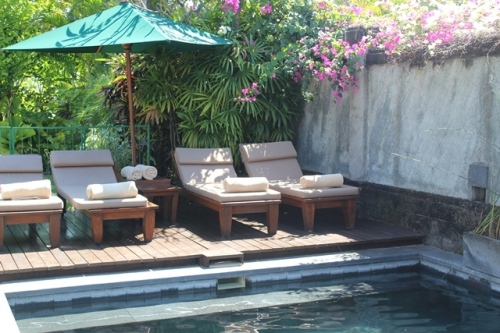 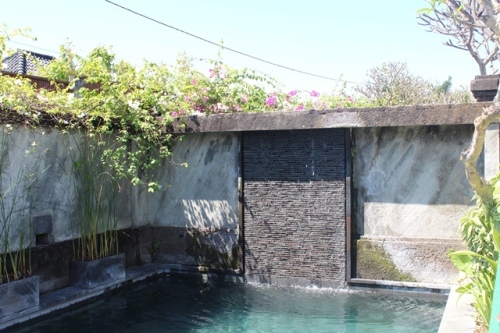 After we’d settled in, A and I went out for some shopping and lunch. A had been threatening to take me shopping for days (and you know I hate shopping). I was not terribly excited about it, to say the least. We left home just after 2pm and walked from shop to shop on Jl. Kayu Aya. I tried on several things and eventually picked up a pair of sandals from one shop and a black dress from another. I also saw a dark blue python handbag I quite liked but didn’t have enough cash with me. We ended up at Trattoria for lunch (no surprises there). After lunch we carried on walking to Seminyak Square and then took a cab home.

On Sunday night we went to Kuni’s, a Japanese restaurant on Jl. Kayu Aya, not far from Trattoria. We had the usual sushi and sashimi and sake. For my main course I ordered the grilled tuna – it was pretty good. We were enjoying our meal until my mum realised that the chopstick holders (pebbles) on each table were put into a box after they were used and then back on the table for the next customers – they weren’t washed after each use! Gross. But nothing here surprises me any more.

After dinner A and I went to Khaima, on the same street, for a much-needed drink (or two).

On Monday we splashed around in the pool for a while and had lunch at home. We then went back to the shop with the snakeskin handbags and I bought the dark blue python handbag I’d seen the day before. We then went to some more shops on Jl. Raya Seminyak with our mum and V. I bought another pair of sandals, and would have bought two more had they been available in my size.

That night we went to L’Entrecote, a French restaurant also on Jl. Kayu Aya (basically it’s where all the restaurants are!). I had the vol-au-vent with escargot to start. It was amazing. My main course (steak) was pathetic compared to the vol-au-vent. We didn’t have dessert and A and I went straight home as we had an early start the next day.

We were up at 3am on Tuesday morning as we were going to Lovina to see the dolphins. We were out all day. That night, Dad insisted we go to Furama for dinner. We thought we’d have an early dinner but there was so much traffic on the way there it took us almost an hour to get there. And when we did, the restaurant was busy due to the Eid holiday. The queue was out the door. We managed to get a cramped booth at the back and ordered our food. It was hot and crowded and I couldn’t wait to get out of there.

On Wednesday we all went to Discovery Mall (except Dad). A had some last-minute shopping to do, Mum needed a couple of suitcases, and I was looking for a backpack to take to Komodo. We were there forever. When we were finally done we decided to go to McDonald’s for lunch (A’s choice).

That night the four of us (our parents, A and me) went to Ultimo, an Italian restaurant just a couple of doors down from Trattoria. It was packed. We waited for a table at the bar and eventually got one about 15 minutes later. I was surprised at how big the restaurant was once you walk in. There was a live band playing all kinds of music – everything from The Eagles to Sade to Richie Valens. I had the goat cheese ravioli to start with and then grilled barramundi for my main course. 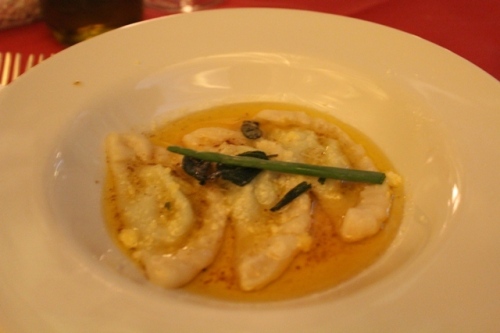 For dessert I ordered the strawberry millefeuille – it didn’t look at all how I expected it to! 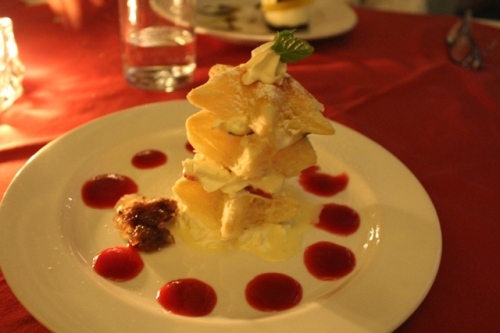 After dinner A and I went to Hu’u Bar for a couple of drinks.

It was quite empty.

We had two drinks each and I also bought a bottle of their mosquito repellent Shu’u Off – it smells so good, much better than the citronella I’ve been using for the last few weeks.

On Thursday there was more splashing around in the pool. As it was A’s last lunch in Bali she got to decide where we had lunch. We went to Trattoria! After lunch the two of us walked to one of the shops she wanted to go to while our parents went back to the villa. Mum was back a few minutes later with V. A picked up a handbag and I unexpectedly bought a dress. Not a bad week for shopping and me at all!

That evening we all went to the airport to see off A, V and the nanny – they had a long 20-hour flight ahead of them. My parents and I went to Queen’s for dinner. I just fancied some Indian food – paneer and makhani dal, that was it.

Friday was relaxing – I didn’t do very much. I read by the pool, did some work and then we went out for dinner. We went to Sushi Tei – the service was as bad as ever. It seems to get worse each time I go there. We ordered what we usually do (sashimi salad, sushi rolls, chicken gyoza) – and I ordered a salmon with miso butter as well. I was the only one to eat that – and I woke up at 4am feeling really sick. I spent most of Saturday feeling nauseated.

On Saturday afternoon Mum and I went to Sukawati to see the art market there. We weren’t there for very long as I wasn’t feeling that great and started to feel worse the longer we stayed there. On our way back we stopped at the Bajra Sandhi Monument, a monument dedicated to the struggle of the Balinese people.

When we got home I had a nap. When I woke up it was dark. I felt a bit better but not great. We stayed in that night and ordered room service. I was in bed again by 9.30pm. How’s that for a Saturday night?