What a busy week!

Aside from gym sessions and work, it’s been quite a social week.

On Monday I had dinner with NP at Zuma. I hadn’t seen her since before the summer and it was fun to catch up. The food at Zuma is always excellent: we had the sliced seabass with yuzu and truffle oil (amazing), tuna tataki, Zuma salad and rock shrimp. We skipped dessert although I’m going to have to go back at some point and have the green tea and banana cake!

On Tuesday evening, Mum and I went to the Dubai Mall as she wanted to send some chocolates to Bombay. In the end, she picked up a box of dates from Bateel. Every time we go there the man at the counter gives us a taster – I usually go for the dates with pecan but this time I also tried one with ginger. It was interesting, but I prefer the pecan. 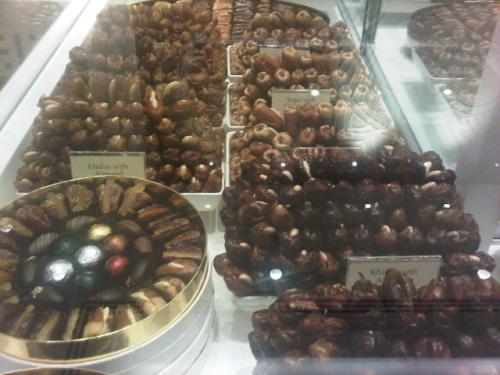 The Hummingbird Bakery also had its opening at the Dubai Mall on Tuesday and they were giving away free cupcakes. Yes, of course I had one. You could choose any one you wanted so I got a red velvet cupcake. The mall is becoming a dangerous place!

I went to see ‘The Imposter’ on Wednesday evening with a friend and one of her friends. I’d heard about the movie and it was the last night it was playing so I decided to go (and also because I really fancied some popcorn). ‘The Imposter’ is a documentary about a French man who manages to convince a Texan family that he’s their long lost teenage son. It’s a true story. I can understand that they must have been desperate to believe that anyone was Nicholas, but these two people looked nothing alike. Nicholas was blond with blue eyes, Frederic Bourdin had brown eyes, dyed blond hair and spoke with a French accent. Even with a shadow of a doubt, wouldn’t you insist on a DNA test? There were some funny moments in the movie, such as when Nicholas’ sister recalls receiving the phone call telling her that he was found in Spain, she says ‘Spain? Isn’t that on the other side of the country?’ Good grief.

We had a girls’ night on Thursday evening – five of us went to Loca at the Dubai Marine Beach Resort. I’d never been there, and it was a nice place. We started with wine and I moved on to vodka after that. It wasn’t a very late night, and we did eat while we were there (spinach and artichoke dip, spicy guacamole, lamb burrito – which was actually very tasty) so I didn’t feel too awful the next day.

Dad and I had lunch at Sakura on Friday with my uncle, aunt and their grandchildren. My cousin was out of town and I ended up sitting between the 12-year-old and the 4-year-old. I had a headache by the end of lunch. My mum’s aunt and her two sons came over to visit later that afternoon and stayed for a couple of hours. I’d forgotten how much my great-aunt looks like my late grandfather – they have the same eyes – and I couldn’t help but miss him.

That night I was supposed to see The Proclaimers at Irish Village with a friend and were told tickets were available at the door – but when we got there they had sold out! Who knew they had so many fans in Dubai? Or anywhere, for that matter? We decided to go for a drink instead and ended up at Carter’s at Wafi. The crowd was dire and the music was appalling. We sat at the bar and had a few drinks and I was home before midnight.

I lazed around the flat on Saturday. I did some work, watched some episodes of ‘Suits’, Dad left for Jamaica. I met up with a friend for drinks and dinner that night. We met at Karma Kafé at Souk Al Bahar with two of her friends whom I hadn’t met. We had a few drinks at the bar intending to move on to Bice Mare for dinner, but in the end we stayed there for dinner. It was a fun evening, the vodka was flowing, the conversation was stimulating and the food was great. We had salmon tataki, prawn tempura maki, new style tuna sashimi, black cod with nam pla sauce, and a chocolate fondant for dessert. We calculated at the end that we’d had 25 vodkas between the four of us by the end of the evening!