On Sunday I had been in Dubai for exactly 11 months! The time has just flown by…

Apart from work and the gym I didn’t do much else on Sunday and Monday.

I had my first piano lesson on Tuesday! It was supposed to be at 2.30 but the piano teacher called me to ask whether we could make it 3.30? That was fine with me – I got there at 3.25 and he wasn’t there yet. He called me at 3.30 to say he would be about 10 minutes late (again). He was 25 minutes late – he said there was lots of traffic – and so he gave me (and charged me for) only half a lesson. I hope this doesn’t happen every week!

The lesson was interesting – we went through various scales and chords and then he gave me a couple of sheets of music and asked me to play them. The first one was simple – he made me play the right hand only but without looking at the keys. After I’d played it a couple of times, he covered it up so I couldn’t see the notes and asked me to play it again. I could remember the first seven bars (the piece was only 16 bars long) and he told me I had a good memory. He turned it over again and made me play it again, reading the music. To cut a long story short, I could remember the whole thing in about 7 minutes (but it was really basic). The second piece was a bit more complex – he didn’t ask me to memorise it – but I was playing with both hands. He gave me some things to practise during the week and my half hour was up very quickly.

On Wednesday night I had dinner at my cousin’s place – it was very chilled, just her, her mum and me.

On Thursday I decided to have a manicure and pedicure at the Fairmont. It was pretty crowded as it was a Thursday afternoon but the whole place smelled like sewage! Apparently there were some building works going on in the basement and the salon had been smelling like that for three days. It was not pleasant.

That night I met up with a friend and a few of her friends. I’d never met any of them before but it was a fun evening. On my way to The Address Downtown it started raining! This was only the second or third time I’d seen rain in Dubai. We met at the Cigar Lounge and sat outdoors (it had stopped raining by then) – there’s a great view of the Dubai Fountain and Burj Khalifa from there. We had a drink there and then went down to Calabar. We managed to get a table for six people even though it was crowded. We had another couple of drinks there and I was home by 1am.

I woke up on Friday morning to a dark grey sky. There was thunder and lightning – and lots of rain. Before I moved to Dubai I used to think that all photos showing clouds surrounding the tall buildings were created in Photoshop – but I was proved wrong on Friday! 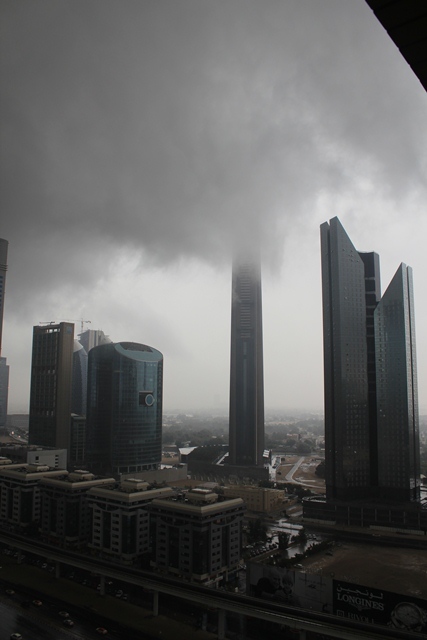 What I really wanted to do was set up my tripod and camera on the balcony but it was so windy I didn’t think it would be a good idea! I could see the traffic backed up on Sheikh Zayed Road and was glad I didn’t need to be anywhere.

That evening I met up with a friend and one of her friends who was visiting Dubai. We went to The Stables behind the Radisson on Sheikh Zayed Road. The two of them got there before me and as I walked in and climbed up the stairs all I could hear were loads of Brits singing along to ‘Wonderwall’. I walked in and got my free glass of champagne (women drink champagne for free until 8pm) and joined the two of them. After 8pm we ordered a bottle of Sauvignon Blanc and carried on talking. A guy who thought he was Snoop Dogg bought us another bottle of wine which we didn’t accept. He was odd – and we ended up leaving because he just wouldn’t leave us alone! I got home at 10pm.

My mum was arriving that night but her flight wasn’t due to land until 2am. What was I going to do for 4 hours? I was on Facebook for a while and noticed that a friend of mine was also online. I asked her if she fancied going for a drink? To my surprise, she actually said yes! I picked her up in a cab and we went to Calabar (yes, again). As it had been raining all day all the seats outside were still wet so we managed to find a table inside and order some drinks (many drinks!). It was a fun evening and we were one of the last people to leave when my mum called me at 2am to say she’d just landed.

Mum was home by 3.30am and we chatted for an hour or so. It was 5am by the time I went to sleep. I was woken up at 10am by the doorbell – Dad had arrived – and I didn’t really sleep after that.

I was exhausted on Saturday and didn’t do very much apart from my writing group at the Pavilion Downtown that evening. The organiser and I were the only people in the group to start with. We were eventually joined by an Indian guy (who was 30 minutes late) and an American woman (who was 45 minutes late). I don’t know what it is about Dubai but people don’t seem to think that being on time is very important. It’s irritating.

The two exercises we did were first-line openers. The organiser gave us an opening sentence and we had to carry on writing. The first exercise had to start with ‘Nobody knew where the lighthouse had come from’. The second exercise had to start with ‘The day of the anniversary arrived with an air of dread’. I found both of these quite easy as you don’t really have any restrictions and I managed to turn them both into something I could continue writing…