Well, half a week, really, as I got back from London on Wednesday morning and spent most of the day either sleeping or unpacking.

On Thursday night my Mum and I went to see Zakir Hussain in concert at the World Trade Centre.

I’ve seen him in concert many times, the last time was in November 2011 in London. What I love about him is that he always performs with different musicians. For this Nirvana 2013 concert he was performing with Bela Fleck (banjo), Edgar Meyer (upright bass), U Srinivas (mandolin) and Rakesh Chaurasia (flute; and he’s the nephew of Hariprasad Chaurasia). Much of the music they played was created by the musicians in the days just before the concert – because they don’t usually play together! They played a fusion of classical Indian music, jazz and rock. They were brilliant (you can read a good review of the evening here). They played for about 2 hours without a break. Suck on that, Enrique!

On Friday some friends and I had booked brunch at Imperium at the Jumeirah Zabeel Saray Hotel. The hotel is fabulous!

That’s not a great photo, but the entrance is beautiful.

Even the chandeliers in the lobby are amazing! 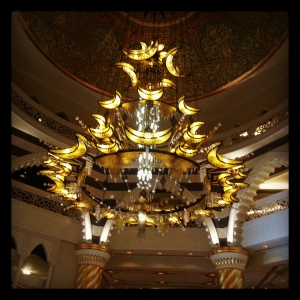 We were there a little early so we walked around for a while before going to the restaurant.

It was a beautiful day to be outside and our table was in a shaded outdoor area. It was an all-inclusive brunch, so we got a glass of Prosecco on arrival and we had the option of wine or a selection of cocktails for the rest of brunch. We went with the Chablis. It cannot compare to the brunch at Al Qasr (I don’t think anything can!), but there was an impressive variety of food on offer – lots of sushi, salads, some roast meats, fresh grilled lobster, and even a pork section (which was empty). Considering there was so much to eat I actually managed to stay away from carbs the entire meal (apart from a bite of chocolate dessert at the end – which really wasn’t worth it). We stayed till 4pm and then headed back home.

The trouble with afternoon drinking (for me) is that I usually want to carry on into the night – but this particular day I couldn’t find anyone who wanted to go out! I ended up sitting at home and doing some work in the end (I did have lots of catch up on after my trip to London).

I was home all of Saturday, working.