I had just about recovered from Wednesday’s session with Randy when it was time to have my Sunday session!

I started with 5 minutes on the cross-trainer and then did the following circuit:

I did that circuit three times and then spent 3 minutes on the cross-trainer. After some water and a short rest, I did the next circuit:

I did some stretches after that and was done for the day.

I had yoga on Monday (nothing new to say about that) and actually went back to the gym on my own on Tuesday. I managed to do 3 km on the treadmill in 25:44 – walking and running – and was quite pleased with that. I thought it would take me longer as it had been so long since I’d done anything on my own! It felt good.

I had a killer session with Randy on Wednesday morning. Actually it was just one particular exercise, but I struggled with it. I started with 5 minutes on the cross-trainer and then did this circuit three times (with a break between sets):

*This is what finished me off. From a standing position, I put my hands on the floor and crawled out so I was in a plank position. From there, I did two push-ups followed by two alternating knee-ins, and then crawled back to a standing position. The crawling out was fine, the push-ups were fine (sort of), the knee-ins were fine, the crawl back was painful. By the last three (of each set) it took all my willpower not to fall to my knees and push myself up that way!

I did another 3 minutes on the cross-trainer and then did the following circuit three times (with a break between each set):

I did some stretching and was done. Looking back at what I did it doesn’t look like much but because I was working each arm/leg separately each set took a bit longer than usual!

If I could do that five times I could do 5 km. I saved the longest run for last so that I’d have the 200 m at the beginning of the next kilometre to recover. It actually worked! At the very beginning of the 4th km I thought I’d need longer to recover but by the time I got to 200 m I was ready to run/jog again. I slowed down a bit in the 5th km – I alternated walking and jogging every 100 m – but I still finished in 41:46. Looking back at my stats, the last time I did 5 km was back in October (in 39:47) so I don’t think I did too badly!

When I got home I tried my new whey protein isolate. I’d just finished a tub of Met-Rx Ultramyosyn Whey Isolate and went back to Nutrition Zone to replace it. The assistant recommended Collagen Sport Whey Protein (French Vanilla) by NeoCell so I thought I’d give it a try. It’s gluten, wheat, sugar and lactose free. I mixed a scoop of the protein isolate with water and drank it. Oh God, it looked gross and tasted vile. I think I need to mix it with low fat milk or almond milk (although I’ve been reading that almond milk isn’t that great for you either!) and see how that tastes.

Low point of the week? I can’t think of anything!

High point of the week? Working out 6 days this week!

Weight loss? None – I’ve been steady at 70 kg this week. I need to be somewhere (anywhere!) in the 60s though… 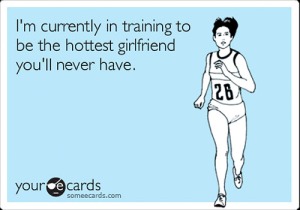 2 thoughts on “The final few”