After my usual session with Randy on Sunday morning I met up with a friend for lunch. We thought we’d try Fuego, the new Mexican place at Souk Al Bahar. We got there a little after 2pm and apart from one other table, we were the only people in the restaurant. We ordered the Salsa Fresca (which was made at our table) and the Fuego Sampler (mushroom quesadillas, chicken flautas, homemade guacamole, tortilla chips and sour cream). For our main course we shared the beef fajitas. I thought the food was average. I’m not a huge fan of Mexican food though, so perhaps I’m not the best judge!

On Monday I had lunch with my cousins at PF Chang and then worked until the evening. I went to the fourth History of Islamic Art session which was all about Persian painting but covered Islamic book illustration all the way to miniatures. These are some of the things we talked about:

I was home all day on Tuesday but Wednesday was busy!

My mum left for India that morning, I had a session with Randy, and I also had my first Arabic class that afternoon. I’d been meaning to take some lessons ever since I moved to Dubai but of course had done nothing about it for ages. I finally sprung into action and found out about classes. I eventually decided to go to the Arabic Language Centre in the World Trade Centre Tower. They had six sessions to choose from – ideally the afternoon class would have been great but it clashed with my piano lesson. I settled for the lunchtime class on Mondays and Wednesdays. There are 10 of us in the class (nine women and one man) and we are from everywhere: UK, India, Czech Republic, Spain, Portugal, Uruguay, USA, Korea, Australia, Russia. Amazing. Some have been here a few months, some have been here for years and finally decided to learn Arabic.

In my first class we learned how to say:

We also learned four letters and practised reading and writing them. I love languages so I’m really going to enjoy this!

In the second half of the class, our teacher had brought sandwiches and other snacks for us, and we listened to a selection of music we could listen to while meditating. The music was varied:

After my class I went home and got ready for dinner (I told you it was a busy day!). I had dinner at Zuma with my dad and some of his friends. The food was fabulous as always and I’d have loved to have had a tuna tataki all to myself!

I had a piano lesson on Thursday afternoon and then had wine club that night.

I always look forward to wine club – it’s one of the best nights out each month – but this time it was awful. The venue chosen was the Media One Hotel in Media City: 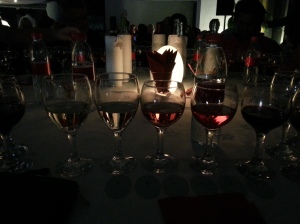 The wines we had were:

We usually all catch up at the bar afterwards and go elsewhere but I just couldn’t wait to get out of there. Three of us went to the the poolside bar for a drink (The Dek on Eight – don’t even get me started about the spelling of ‘deck’). The crowd was quite young, but the music was great – lots of 80s and 90s music. We had a drink there and then went to Calabar to meet up with another friend and some of her friends. That was much better!

I was home all day on Friday, catching up on work. On Saturday I decided to have a massage at Spa Zen at the Radisson Royal. I went early, had lunch by the pool, read my book and then had a hot stone massage. Amazing afternoon.

That evening Dad and I went to see The Big Wedding. It had a good cast, but what a pile of shit. Still, I suppose it wasn’t as bad as Oblivion. We had Iranian kebabs for dinner and then headed home.