After my Sunday morning session with Randy, Dad and I went to Outback Steakhouse at the Dubai Mall for lunch. I love the mall on Sundays – because it’s so empty! After lunch we went to see The Fast and the Furious 6 (Dad’s choice, of course). I thought it was an average movie but that the last 20 minutes were totally unnecessary. Anyway, these days I tend to go to the cinema just for the popcorn (salty)!

I had my Arabic class on Monday. We learned:

A friend of mine from Lagos (GRH) arrived in Dubai that morning for a few days so we had dinner at La Petite Maison in DIFC. As soon as we sat down I ordered a portion of burrata. There was no way I was going to miss out on it again! My friend is vegetarian so when we go out everything we order is vegetarian but I also choose one non-vegetarian dish (of course I would love more than one but then I either overeat or half of it goes to waste). I ordered the crab and lobster salad. He then got a phone call and told me a friend of his was going to join us (he wasn’t vegetarian – hurrah!). So his friend and I shared the turbot – and my goodness, I love their dauphinoise potatoes! After dinner we walked over to Zuma and had a few more drinks. It was a really fun evening…

I woke up a little ‘dehydrated’ on Tuesday – so when GRH suggested going to Wafi Gourmet for lunch I jumped at the chance. I think hummus has become my favourite hangover food. We ordered a few things to share and then I had to head off to my piano lesson.

That night I went to see Amjad Ali Khan at the Madinat Theatre with a friend. We met a bit earlier and had a few drinks at The Agency and then went to the concert. I’d seen Amjad Ali Khan and his two sons in concert in London many years ago. In fact, they were the first classical Indian musicians I’d seen perform live. My grandfather was so excited when I told him I’d been to the concert – until that point I could never understand why he loved classical Indian music so much. He started making CDs of his favourite musicians – I still have them. However, listening to a CD is nowhere near as exciting as seeing a live performance and I don’t really listen to them much…

We had great seats. It was just Amjad Ali Khan in the first segment. 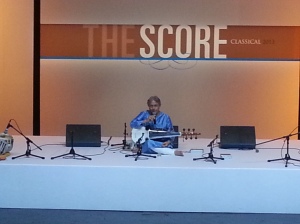 He explained that the sarod isn’t just played with the fingertips, it’s played with the actual edge of the nails. He even filed his nails between compositions. He explained that there is rarely a programme for classical Indian music as the musicians themselves don’t know what they’re going to be playing – it depends on their mood and sometimes they even compose pieces of music while they’re on stage.

In the second segment, it was just his two sons – Amaan Ali Khan and Ayaan Ali Khan. And then the three of them were together:

There’s a far better review here. I even spotted myself in the photo of the intermission crowd! And I’ve only just realised that Amjad Ali Khan changed while he was off-stage – perhaps he was wearing one of his son’s kurtas by mistake?

After my Wednesday session with Randy, I had another Arabic class on Wednesday afternoon. We did:

That evening GRH and I went to see Iron Man 3. I hadn’t seen the first or second movies but really enjoyed this one. After the movie we walked to Calabar at The Address Downtown for a drink and something to eat. It wasn’t a late night.

I had lunch with NP at Jones the Grocer on Thursday – I’ve resigned myself to the fact that even though I look at the entire menu I know I’m going to have the Wagyu burger and fries. That evening GRH and another friend of ours had dinner at Bice Mare in Souk al Bahar. We shared a couple of starters and then I had the baked turbot with artichokes and black truffles for my main course. After dinner GRH and I went to Zuma to meet up with some other friends. It wasn’t a late night but it was fun.

I had Friday brunch at The Ivy with some girlfriends to celebrate one of their birthdays. As I intended to get some work done after brunch I opted for brunch without alcohol (shocking, isn’t it?). There are two brunch options – you can either have the eight-course tasting brunch or the three-course a la carte brunch. The eight-course menu looked fantastic but I thought it would be far too much food, so I went for the three-course brunch. For starters I ordered the French toast with berries. It was good, but I still think the French toast at Raoul’s in Maida Vale is better! I couldn’t decide what to eat for my main course and eventually ordered the fish and chips. The portion was huge (a pleasant surprise compared to the tiny sea bass I’d had the week before). 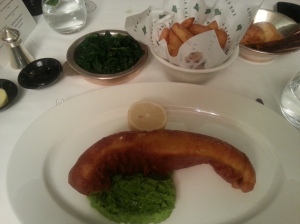 I ate only half of it.

For dessert I had the red velvet coupe. 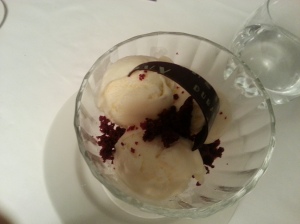 And of course I had to have some cheese too. I don’t know why I had it because I was already full but I couldn’t resist it.

Also, there was a live singer at The Ivy (I believe he’s there every Friday for the brunch crowd) – and he was amazing. I couldn’t see him from where I was sitting and when he started singing I thought they were playing a Michael Bublé CD!

I went home, did some work and then went to Siddharta Lounge at Grosvenor House for another friend’s birthday. It was a nice evening – I knew a few people there but met some new interesting people. I hadn’t been to Siddharta Lounge since last May and had never sat outside before. It was a lovely evening but quite warm! 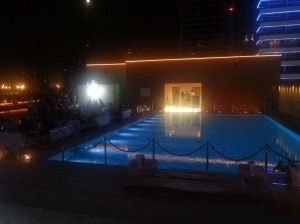 I ended up staying later than I expected (to the end, basically!) and my hosts gave me a ride home. It was a lovely evening.

I spent most of Saturday by the pool with a book.