I didn’t have a session with Randy on Sunday as the schedule for my Arabic classes for the week had changed. There would be three classes instead of two – on Sunday, Tuesday and Wednesday. On Sunday we covered:

That evening I went to Spa Zen at the Radisson Royal for a massage. I’d used an Entertainer voucher in May and had a free massage to enjoy. I slept well that night!

On Monday I had yoga and decided to go to the gym for a quick workout as well. I was home working the rest of the day.

I had another Arabic class on Tuesday. We covered:

I had a piano lesson soon after my Arabic class so one of my friends and I went to Costa for a coffee and a quick bite to eat. My piano lesson was good – I’m really enjoying it and I’ve even managed to practise regularly recently. I started learning ‘Stay’ by Rihanna.

I had my third Arabic class on Wednesday. We covered:

That evening I went to my creative writing class at The Pavilion Downtown. It had been cloudy all day but on my way to my class I realised how low the clouds were.

There was a cloud right in the middle of the Burj Khalifa!

My writing session that day was about dialogue (which I’m rubbish at). Dialogue sets the scene, defines characters, breaks up prose. One of Elmore Leonard’s tips is to avoid describing people and places as much of it will come through in the dialogue. Dialogue also creates pace and is the best device for the delivery of information. It pushes the story forward. Silence also says a lot in a story. Some tips we were given about dialogue were:

We then had to write a dialogue between two people, imagining a third person was eavesdropping. I wrote about an 8-year-old girl whose parents had organised a surprise birthday party for her and were trying to figure out where to tell her they were going.

We then talked about setting and how a place can be one of the characters (e.g. New York in ‘Sex and the City’). Time is also important – a contemporary novel is fairly straightforward but when writing a historical or futuristic novel you need to research: food, fashion, what’s on the radio, conversations at the pub, and so on. We then had to choose a setting and write a short paragraph. I wrote this:

Oxford Street at Christmas always reminded her of the video game Frogger which she used to play as a child. Shoppers, cars, cyclists, buses – nobody cared who they bumped into or ran over as long as they got what they wanted where they wanted. It was the complete opposite of Christmas. She thought of the frog crossing the three lanes of traffic, jumping from one floating log on the river to another, and then finally arriving safe on the other side of the river bank.

She always felt relieved when she walked past McDonald’s towards the relative quiet of Hanover Square. She could breathe again – the crisp air entering her lungs. It was just a brief respite though as soon she would leave the square and end up on Regent Street which she would also have to cross. Admittedly it wasn’t as bad as Oxford Street but by the time she got to her yoga class she was ready to snap off someone’s head.

On Thursday I went to my niece’s 5th birthday party at Chunky Monkey on Sheikh Zayed Road. My dad and I didn’t go for the whole thing though – we got there just in time to cut the cake (and have some pizza and samosas). There were about 20 kids running around and one of the staff shouting into a microphone. Had I gone for the whole party I’d have left with a headache. My 13-year-old nephew came up to me and asked: When are you going to get married?

WTF? Was I really going to have this conversation with a 13-year-old? ‘Why are you asking me that?’ I thought one of his grandparents might have put him up to it.

‘I want to play the guitar at your wedding.’

Aww – that was sweet.

‘How many lessons have you had?’ I asked.

Oh – well, he has plenty of time to sort himself out!

That night I went to wine club which was held at the Sheraton next to the Mall of the Emirates. I went with a couple of friends and met some other regulars there. It was a fun evening, the food was good and the wines weren’t bad either. We had:

After wine club several of us went to Vantage, the wine bar at the hotel. Unfortunately the only seating they had available was outside and it was hot. My blowdried hair soon started to resemble Chaka Khan’s. We had more wine and then a few of us went on to Centre Circle Bar at the Ramada Chelsea. We were there till they closed.

Getting home was interesting. At some point in the evening we were joined by an English woman who was new to Dubai – she’d been here 8 days. She’d been at wine club (although I didn’t meet her there) and she joined our group while we were still at Vantage. It was only when it was time to leave the Ramada that we realised how wasted she really was. She refused to go home. She wanted to go out dancing. I explained to her that it was after 3am and nothing would be open at that time. She insisted that she didn’t want to go home. When she realised that we were all leaving, she got into the cab with us. I asked her where she was staying. Her response? ‘I don’t know.’ Jesus. I asked her if she was staying at a hotel – she said she was but she couldn’t remember which one it was. There are hundreds of hotels in Dubai – this was going to take a while. ‘It’s on Sheikh Zayed Road,’ she finally said. Was she aware that Sheikh Zayed Road actually went all the way to Abu Dhabi? I thought I’d try my luck and started listing each hotel on Sheikh Zayed Road starting at the Trade Centre Roundabout and working my way down. ‘Is it the H Hotel?’ ‘Noooo.’ ‘Is it the Fairmont?’ ‘Noooo.’ Is it the Radisson Royal?’ ‘Yes!’ Oh, thank God. ‘Do you know your room number?’ She seemed to remember a room number – I hoped it was hers. When we got to the Radisson, she almost fell out of the cab. In hindsight I should have taken her up to her room, but it was 3:45 at this point and I really needed to get home.

I was home all day on Friday with a stinking headache. I’d have loved to stay home that night but I had a cousin in town from Bombay and I told her we’d meet for a drink at Okku that evening. We had a couple of lychee martinis and my other cousin who lives in Dubai joined us as well. We parted ways at 9pm as my cousin from Bombay had dinner plans and my Dubai cousin and I were going to Ruth’s Chris for steaks with a friend. The steaks there are just so good – and we had some lovely red wine to go with it.

On Saturday I went to Wafi Gourmet with my Dubai cousin, my Bombay cousin and her husband. I wasn’t feeling great – my throat felt a bit scratchy and I felt a little feverish too. I went straight home after lunch and took it easy.

That evening my dad had invited one of his banker friends and his girlfriend out for dinner. We went to Tong Thai at the JW Marriott Marquis. It’s a lovely restaurant, and very big. 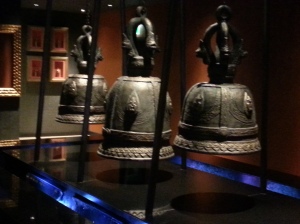 The staff were very attentive. The food was great, quite spicy, and the portions are large. My dad and I shared a tom yum soup but four people could have shared that as a starter. We also had two salads as our starters and ordered one chicken dish and one pad thai for our main course. Halfway through dinner I suddenly felt exhausted. I couldn’t wait to get home, take some Panadol and get into my pajamas. I knew I was getting sick.