I had Arabic every morning from Sunday to Tuesday and then I was done with my Beginners II course! We covered:

The Beginners III class starts in September but as I’m planning to be away for most of October I have to wait until November to start again. I’m quite disappointed about that – and I’m also worried I’ll have forgotten everything I’ve learned so far.

After my class I had a session with Randy. I was home for the rest of the day.

After my Arabic class on Tuesday I had lunch with a friend at Noodle House at DIFC. I’d never been there before but would go back just for the sea bass. 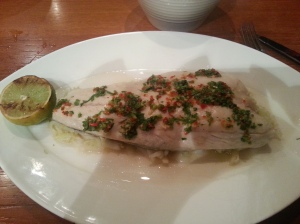 After lunch, we went to Pinkberry for some frozen yoghurt. It was my first time having Pinkberry!

On Tuesday evening I went to see a French/Arabic movie called Le Sac de Farine. It was organised by The Scene Club and was shown at Knowledge Village Conference Centre. It was free – and included free water and popcorn! The director was also there and did a Q&A session afterwards. They show a movie every month and I’ll definitely go to more events like this – I didn’t even know this existed.

On Wednesday night my mum, sister and I went to Lafayette Gourmet for dinner. We all wanted something different so this was perfect. I had a hot and sour soup to start with followed by some sushi; my mum had a lamb shawarma sandwich; my sister had kebabs and a mushroom pasta.

It was Eid on Thursday (hurrah!) and it was a holiday. That night I met a friend for some drinks at Zuma. We got there early enough to get one of the tall tables in the bar area. By 9pm, the place was packed. The music was back on and it was loud! A guy asked us whether he could perch at our table – of course we said yes. We started chatting – he was from Bahrain so I started practising my Arabic with him. He laughed at my accent. I expected that though! He told me he’d been learning Spanish – so we started conversing in Spanish. I love languages! We left at about 10.30pm as my friend had an early flight the next day. I dropped her home and then went to the Marriott Marquis to meet another friend and some of his family who were in town. Unfortunately they wouldn’t let us go up to The Vault as one of the guys was wearing slippers, so we ended up at the bar at the Indian restaurant, Rang Mahal. I’ve noticed that all the restaurants in the hotel are absolutely huge, and they’re mostly empty. After a couple of glasses of wine, we decided to go to Calabar at The Address Downtown for our last round of drinks.

I had a headache on Friday but also had a friend in town who was in Dubai for the weekend. She lives in San Francisco but had been visiting her parents in India and decided she was going to come over for the weekend and take me out as a belated birthday present! We hadn’t met in almost 3 years so we had lots to catch up on. We had lunch at La Petite Maison. We got there at 1.30 and we were there until 6pm. We had the burrata (of course), the lentil salad, the pisaladiere (without the anchovies) and the goat cheese salad. And a glass of champagne. We talked and talked, and decided we’d rather skip the main course and go straight for dessert. We had one warm chocolate mousse and a cheesecake, and coffee. The food and service were both excellent.

That night we had dinner at Karma Kafe with some other friends. The food was good, but it was really warm in the restaurant – they were having some trouble with their air-conditioning and I think that has been going on for some time now. After dinner we went to Sake No Hana for a drink and then went home.

On Saturday we went to Kaleidoscope at The Atlantis for lunch. It was like a zoo – there were people everywhere. The first time I went to The Atlantis was in 2009 and I remember being so impressed with their aquarium. Now, having seen the one at the Dubai Mall, this aquarium seemed tiny in comparison. 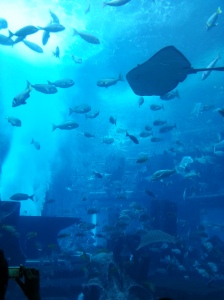 Lunch was fabulous. It was a buffet – and they served all kinds of cuisine. I have to say the sushi didn’t look very appealing and I stuck to the Lebanese/Arabic food for most of it. They also had Indian, Mexican, Chinese and Italian food. The dessert section was impressive:

I tried the carrot cake and the red velvet cake. The portions are a perfect size – two bites and you’re done.

We walked around a little bit more, looking around the hotel.

The blue room I fell in love with… 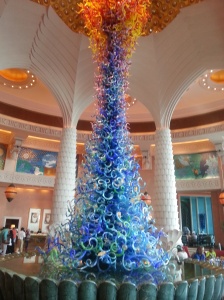 By this time it was almost 5pm and we decided to head home. That night some friends invited us over to their place for dinner. I went to pick up my friends from their flat in Burj Residences. It used to take me about 10 minutes but on this occasion it took me over 40 minutes. Previously you would have to make a U-turn on the boulevard but since they’ve installed the new traffic lights you can make a left straight into the road where the Burj Residences are. It took forever. The lights changed so quickly I was stuck in that traffic for almost 30 minutes. I know now to go the other way round! It was 10pm by the time we got to our friends’ place for dinner. It was a chilled evening and we were there until 1am – late for a Saturday night (in Dubai).