After my session with Randy on Sunday morning, my parents suggested that I sort out my PIO card. I’d been putting this off for one reason or another but my parents were insistent that I sort it out. Ugh.

Mum and I went to a typing centre at Al Khaleej Centre. I don’t know why we went all the way there because I’m sure there must be places closer to us that offer the same service (or I could have done it at home). They basically filled in the application form for me – I took my passport, my parents’ PIO cards, their passports and they did the rest – and gave me a printed copy. All I had to do was take the form and submit it with all the relevant documents.

That afternoon I went to The Dubai Mall to meet a friend who was in town for the day on his way back to Lagos. I thought we’d go for coffee but he wanted to have a milkshake. I vaguely remembered seeing a milkshake place near The Cheesecake Factory so we went looking for it. We stumbled upon a calligraphy sculpture exhibition called ‘Moon Reflections’ in The Souk section: 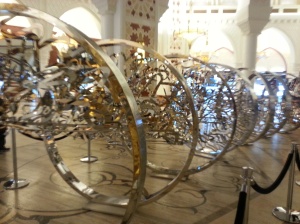 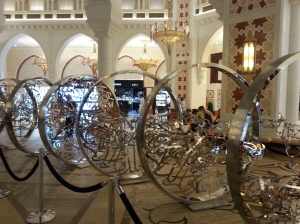 I thought it was pretty cool… I decided I’d take my DSLR camera to the mall later in the week and take some better photos.

We eventually found the milkshake place – it was called Millions of Milkshakes. My friend ordered an Oreo milkshake with cookie dough and I just couldn’t decide what to have. He tried to convince me to have the Galaxy milkshake but I knew it would be too sweet and I’d get sick of it. I opted for a mixed berry milkshake instead – and I’d have it again if I went back there. We caught up over our milkshakes and walked around the mall for a while and then headed home. He had a work event to go to and I had some work to do.

On Monday afternoon I went to see my GP about my knees. I wondered whether I should wait until my knees were sore again before going to see her but I didn’t want to start running, have to stop because of the pain and then start again. She asked me what kind of pain it was and how bad it could get – she was surprised when I told her that when it’s really bad it wakes me up in the night. She checked the range of motion of both my knees (all fine, no pain) and told me to start taking glucosamine and recommended SynoShield Forte (glucosamine, chondroitin, MSM with type II collagen biocomplex) twice a day for 2 months. She also suggested I have an X-ray of my left knee (instead of doing both knees, she thought it would be best to do the one which usually ached more). The radiology clinic wasn’t far from the GP so I went straight there after my appointment. They told me their X-ray machine was out of order and I would have to go to their other branch in Umm Suqeim. I decided to go home for lunch first and then went for my X-ray.

I didn’t have to make an appointment, I could just walk in and would be seen as soon as they were free. It was empty when I got there and I was taken straight in after filling in a registration form. I lay on the table and the X-ray technician positioned my knee so that my leg was straight for the first X-ray and then she covered me with a lead blanket from my thighs upwards. For the second X-ray I had to bend my knee and lay it flat on the table, turning a little on to my left side. I was done in 5 minutes. The results would be sent to my GP and she would let me know if anything suspicious showed up. (I got the all-clear on Wednesday morning.)

On Tuesday morning, my mum and I left home before 10am to sort out my PIO card at the Indian Consulate. I decided I’d do all the photocopying I needed when I got there:

I was sorted. There was no queue and we saw the lady immediately. She went through my forms: ‘Yes… Yes… Good… Sign here… Yes…’ And then: ‘No birth certificate?’ F***. It wasn’t even on the list of required documents. F***, f***, f***ety f***. And where is my birth certificate? In my safety deposit box. And where is my safety deposit box? In London. F***. It will have to wait until November.

On Wednesday evening I met up with a new friend for drinks. I met him at a friend’s dinner party in July and we eventually met this week. We went to La Serre at the new Vida Hotel downtown. It was quite empty when we got there – we met at 6.30 – but by the time we left (10pm – four glasses of wine and one vodka later) it was pretty crowded. It was a fun evening – and nice to talk to someone new…

On Thursday evening a friend invited me and a couple of friends to her brother’s flat in the Burj Khalifa (her brother was out of town). Trying to get into the Burj Khalifa is like getting into Fort Knox. Actually I’d imagine getting into Fort Knox is easier! The first security check is in the driveway – you stop, tell the security guy what flat you’re going to, they call the flat, the flat confirms whether or not you’re telling the truth. Then they let you through (or not). Once you’re in the building you have to check in with the receptionist – they ask what flat you’re going to and your name. Residents have to let security know in advance if they’re having people over. The receptionist then escorted us to the lift and we went up to the 23rd floor. The view was spectacular. 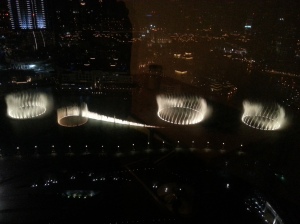 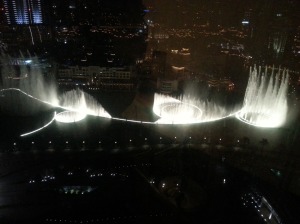 We had some cheese and wine – it was a really nice evening. At about 11pm we decided to go to McGettigan’s for a drink. On the way out of the building I noticed the entrance to the Burj Khalifa Residence (I saw it on the way in obviously but didn’t really look at it as I was so flustered with the whole security process). There are cymbals on long poles that go all the way up to the ceiling – they’re different sizes and are placed at different heights. Water drips from the ceiling on to the cymbals and creates melodies! Isn’t that just genius?

We went to McGettigan’s for a drink and then headed home by 12.30. It was a nice evening – not too crazy!

On Friday, me and three girlfriends went to Spa Zen at the Radisson Royal on Sheikh Zayed Road. We’d bought a Cobone deal a couple of months before and decided we’d make a day of it. The voucher cost AED275 – it included use of the pool, steam room, sauna, jacuzzi and a 75-minute massage. Considering their 60-minute massage is AED400 and you have to pay extra to use the pool, it was a bloody good deal. 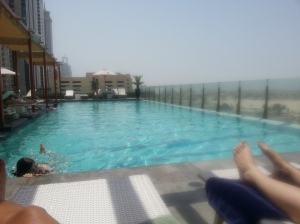 The pool at the Radisson Royal

We got there at noon, swam, sunbathed, read, had lunch, had massages, went back to the pool to watch the sunset. 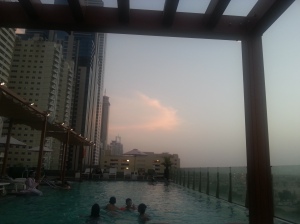 I was home all day on Saturday – I went to the gym, I swam, I read my book by the pool, I caught up on some work. A lovely day!