I had my usual gym sessions and work all week but managed to squeeze in some fun too!

On Sunday night a friend and I went to Okku for drinks. Neither of us had been in ages. I tend not to go out on Sunday evenings as I usually have yoga the following morning, but this week I didn’t have a class so decided to make the most of it. Even though Sunday is the first day of the week here in Dubai, Sunday night is a big night at several bars and restaurants. In fact, Sunday night is the busiest night for Okku.

We met in the lobby of the H Hotel at 9.45 – it wasn’t too crowded at that time so we managed to find a spot at the bar easily. I decided I was going to stick to vodka soda all evening – my friend started with a Diablo Martini, then she had a dirty vodka martini, and then she joined me with the vodka soda! The bartender also gave us some free shots – which was nice of him! I bumped into three people I knew (which never happens to me in Dubai – because I know all of 10 people here) – including the friend I met for drinks at La Serre the week before. It turned out that the friend I was with knew him too – it’s such a small world. And I think that world is even smaller in Dubai. We decided to leave at about 12:30 and I was home soon after.

What I’ve noticed in Dubai is that people who live here speak at least two languages: English (usually) and something else. My friend met one of her friends at the bar and I asked him how many languages he spoke: English, Arabic, French, Creole (he lived in Haiti for 12 years), Spanish and German. Bloody hell!

On Wednesday night I went to La Serre for dinner with a couple of friends. My friends were already at the bar when I got there and it was nice that the bartender remembered me from the week before. We decided to go to our table but it took us an hour to order our food as we were busy catching up and couldn’t decide what to eat! The menu is almost identical to the one at La Petite Maison. We were told that they didn’t have any burrata (WTF?). One of my friends had eaten at La Petite Maison for lunch that day and he said they didn’t have any either. We came to the conclusion that there must be just one supplier of burrata in Dubai and now that another restaurant was ordering it, each restaurant was getting less than they needed. Eventually a starter dish was brought to our table by mistake – the grilled aubergine with feta and prawns. We pointed out the mistake to the waitress who brought it but were told it was ‘from the chef’ – it was actually pretty good and not something we were considering ordering. We eventually ordered the tartare de boeuf (beef tartare with truffle egg – excellent) and calamars frits enrobés de plaintain (fried calamari coated in plantain – as expected). For our main course we ordered the bar Chilean grille et haricots de Soisson (grilled Chilean seabass with Soisson white beans – bland and disappointing) and the cote de veau grillée (grilled veal chop – yummy). We skipped dessert but had three bottles of rosé between us over the course of the evening. The wine was called Whispering Angel – and I think we chose it because we all loved the name (I don’t think the sommelier was too impressed with us). I really wanted to go out after dinner but my friends weren’t having any of it (although I could tell they were tempted) – it was almost 1.30 when we left the restaurant…

I spent most of Thursday in my pajamas, working. That evening I met up with a friend at Zuma for what was supposed to be early drinks. We got there before 8pm and the bar was already packed. She decided 11pm would be our cut-off point – she had an early start and I didn’t mind as I wanted to go to the gym in the morning. Well, clearly that didn’t happen. A couple of guys started talking to us at the bar – one was English, the other Irish – and we really weren’t interested. The English guy was already trashed – they’d been drinking since 1pm – and he was slurring and going up to random women and annoying the hell out of them. Eventually, he came back to us and told us that he’d been asked to leave and was escorted out by two bouncers. Why was he asked to leave? Aside from being extremely drunk, he went up to a group of women and asked them if they were hookers. Admittedly, sometimes it’s hard to tell in Dubai (I’ve heard of guys playing a game called ‘Pro or No?’) but I imagine these women weren’t too thrilled!

While chatting to the Irish guy, it turned out that he regularly visits Lagos for work. And then it transpired that he knew my entire family – one of my dad’s brothers, my cousins, my mum’s uncles and cousins. It was very weird. He seemed to know more people in my community than I do. My friend decided to leave before 11pm – I think she’d had too much wine. I was happy to stay on with the Irish guy for another drink – that is, until he started hitting on me. And when I told him I was flattered but he really wasn’t my type, he got a bit nasty. So I told him to stop behaving like an asshole and to leave me alone. And he did. Two guys (one English, the other Australian) standing behind us had overheard our conversation and asked if I was OK. I was fine. Irritated, but fine. I ended up hanging out with these two guys for a while and then went home. What a night!

Oh, I also met the DJ properly for the first time. We follow each other on Twitter and send tweets to each other every now and then. When he started playing ‘Never Too Much’ I tweeted him to say I loved Luther Vandross. ‘You’re here! Come and say hi!’ What a nice guy – good DJ too.

I spent all of Friday in my pajamas. Heaven.

My parents left for India on Saturday morning. I went to the gym, pottered around at home and then went to my writing group. I hadn’t been in months. I thought about sitting at home and not doing anything but thought I’d try and be productive. The writing group usually meets at The Pavilion Downtown but that has been closed for renovations since the beginning of Ramadan. Recently the group has been meeting at Book Munch Cafe in Al Wasl Square, near Safa Park. It’s a small cafe/bookshop and it’s so cute: 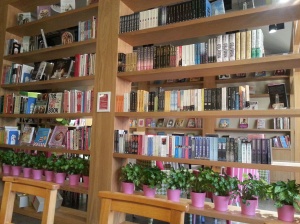 I was the first person to arrive – and they had no other customers. They had a good selection of books too (dangerous for me!). The menu looked interesting (everything from all-day breakfast to burgers and chips) but I didn’t really fancy anything so I just had a decaf cappuccino. A little while after we started, another group of five people came into the cafe and sat down. The food that they ordered looked pretty good and I was starting to get hungry. Just as we were finishing up, the waiter brought over a slice of carrot cake, a slice of chocolate cake and a slice of pumpkin cheesecake. We thought there had been some mistake and that it was for the next table, but it turned out that the next table were the owners and that they recognised one of the people on our table (he’s a principal at one of the schools in Dubai) and sent us some complimentary dessert. The carrot cake was good (but better at Baker & Spice, I thought), the chocolate cake was too rich for me, and I didn’t try the pumpkin cheesecake.

As for the writing itself, I really should have stayed home. I couldn’t focus on anything; none of the topics we talked about really interested me and I didn’t write anything worth mentioning. During the first exercise I switched off in the first two minutes and started writing about something that was on my mind rather than concentrating on the topic we were given. I was very aware that I wasn’t present the whole time I was there and just wanted to go home. We finished at about 8.30 and I headed home, had some dinner, got into my pajamas and got into bed.