What a busy week! I had my usual work and gym sessions but it was also a very social week…

After my session with Randy on Sunday morning I went to the airport to meet a friend from London who was on his way to Riyadh. He’d been in Abu Dhabi for work and his flight to Riyadh was leaving from Dubai. We went to the food court in Terminal 1 and ended up having ice cream rather than coffee. I had a scoop of the Pralines ‘n Cream flavour. I don’t eat ice cream very often and I never know what flavour to have! We spent about an hour together and then he had to go check in for his flight.

By this time it was 2pm and I was getting hungry. I’d been meaning to go to the Dubai Mall to take some photos of the Moon Reflections sculpture so I decided to do that and have some lunch there too. I’d been thinking about the pasta with creamy salmon at Vapiano for a few days so I took my photos and then headed down to the Lower Ground Floor to the restaurant. Being Sunday it was fairly empty – I ordered my food and a Diet Coke and thoroughly enjoyed it when it arrived! I was home by 3.30pm and spent the rest of the day at home.

As I didn’t have yoga on Monday, my cousin and I decided to go to Tim Horton’s for a coffee. She’d been in London for a friend’s wedding and we hadn’t caught up properly. We spent about an hour there and I went home for lunch and to finish off some work. At about 5pm I noticed that it had suddenly gone very dark – I looked out the window and all I could see was… nothing. It was like being in a big white cloud – I felt like Mary Poppins. 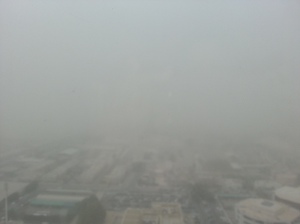 The sandstorm came out of nowhere. Visibility was very limited for about 10-15 minutes but gradually started to improve. As it cleared up I couldn’t believe my eyes when I saw people still swimming in the Shangri-La pool. Sandstorms are disgusting – if you happen to find yourself outdoors and in the middle of one you will end up with sand in your hair, eyebrows, eyelashes, nostrils, ears, teeth, throat – it gets everywhere!

That evening I went to Galleries Night in Alserkal Avenue with a friend. It was the first event of the new art season – it’s a sign that summer is definitely over and things are starting to happen again! All the galleries were open and serving refreshments. I was surprised to see some of them serving wine and champagne as I didn’t think they’d have a license there.

We started at Salsali Private Museum which was exhibiting photos by Christian Voigt. I loved them. All of them.

There was also a fabulous photo of Downtown Dubai (which I never tire of looking at) and one of the Pharaoh’s tomb in Egypt.

At another gallery (I can’t remember which one) we met a young local Emirati photographer who had three photos exhibited – I liked all three photos which depicted life, death and burial with a woman’s hands and jewellery. I also liked some work by Jung Lee at the Green Art Gallery. 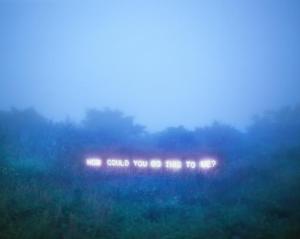 We walked around a few more galleries but nothing was as good as the Christian Voigt exhibition (for me).

While walking around Galleries Night I realised I’d forgotten how dressed up people get for events like this. It clearly is the place to see and be seen! Heels, make-up, little black dresses (actually little dresses in all colours) – it all seemed a bit much to me. But I suppose this is Dubai. Note to self: don’t wear jeans to events like this ever again.

After I left Alserkal Avenue I met NP for dinner at MJ’s Steakhouse at Al Qasr. I hadn’t been there before but I had Entertainer vouchers so we thought we’d try it. We each had a glass of red wine and we both had the same steak (200 g organic tenderloin) and shared three sides: garden salad, onion rings and the mac and cheese. While we were waiting for our food, our waiter brought over an amuse bouche – unfortunately neither of us could figure out what it was even though we asked him to repeat it three times. We were then told we could choose our own steak knife. 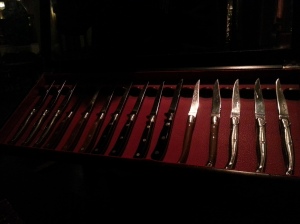 I chose the sixth knife from the left

The food was really good – I’d definitely go back. For dessert, we decided to share the blueberry cheesecake. With my Entertainer voucher we got one main course free, so we each paid AED250 (we saved AED110 each) – not bad!

On Tuesday afternoon I had my first piano lesson since July. I also hadn’t done any practising since my last piano lesson! At about 2.30 Kaleem (our driver) called me to say that the car wouldn’t start. WTF? I walked over to the car park and another driver had jump start cables attached to our car and was trying to get it started. I had no idea what to do, who to call; I don’t even drive! I called my dad who told me to get in touch with AAA who provide roadside assistance. They said they’d have someone with us in about an hour. We managed to get the car started, Kaleem dropped me off at my lesson and I told him to go back home and wait for them to call.

My lesson was good – it was good to be back at the piano. I must practise more! We went over a couple of things I’d been learning (When I Was Your Man by Bruno Mars and Primavera). When I finished I called Kaleem to see if help had arrived. He said they hadn’t called him yet and he came to pick me up. He’d obviously left the engine on the entire hour I was at my lesson because once he switched it off it wouldn’t start again! They called while we were on our way home and had a look at the car. They replaced the battery and everything was fine after that.

That evening I met up with a friend from Lagos who was in town for the night. We went to Loca. We went after dinner so I had a couple of margaritas. One of the guys with us was a stand-up comedian. He was so interesting – and as he was speaking I vaguely remembered reading about him in the paper a few months ago. His father is South Korean and his mother is Vietnamese – he was born and raised in the Middle East and speaks fluent Arabic – in fact, his shows are mostly in Arabic. I asked him what languages he spoke at home with his parents and sisters – they speak Arabic at home, to his mother he speaks Vietnamese, to his father he speaks English, and when the siblings don’t want their parents to know what they’re talking about they speak French which they learned in school. Fascinating! He had us all laughing – it was a great evening.

I was home all of Wednesday until the evening. I went to see a movie called The Hunt (Danish with subtitles) which was being screened at Knowledge Village by The Scene Club. It was absolutely packed and they had to turn away people who had reserved tickets (you sign up online and then collect your tickets at the door – it’s all free). The movie was brilliant but a little disturbing. It’s set in a close-knit community in Denmark. The main character is a teacher who has lost his job and is helping out at the local nursery where he gets falsely accused of exposing himself to his best friend’s daughter. He gets shunned by the community but the ostracism turns to violence when his dog is killed and he gets beaten up while trying to buy food at his local grocery. Eventually everything gets resolved but it just shows you how a person’s life can change overnight. Why would a child lie about something like that? The main character was played by Mads Mikkelsen (Le Chiffre in Casino Royale) and he won the Best Actor Award at Cannes in 2012. It’s definitely worth watching.

On Thursday night a friend and I went to Zuma for drinks. Yes, I go there a lot! We were having a good time – we bumped into the guy from Bahrain we’d met a few weeks before and were chatting with him and some friends until they left. We had just about finished our bottle of wine when the bartender gave us two more glasses telling us they were from the guy standing next to my friend. He was probably in his late 50s, but wouldn’t he have thought that if we were interested in speaking to him, we would have started a conversation? So now we had to talk to him. He was Swiss, born in Ethiopia (he was half Ethiopian but didn’t look it), and spoke German, French, Italian and Ethiopian. His English was terrible. My friend asked him about Haile Selassie and what he thought of him. The Swiss guy then said that he was a descendant of Haile Selassie. I really didn’t want to talk to him so said very little. When the next two glasses of wine came for us (again without him asking us whether we wanted them), we decided it was time for us to leave. When I tried to settle our tab, the Swiss guy told us he would take care of it, and the bartender annoyingly let him and gave my card back to me. So we actually didn’t pay for any drinks at Zuma that night. Did I have a business card for him? Hell, no.

It was only 10pm at this point and my friend and I decided we’d go elsewhere for a drink. We walked into McGettigan’s and decided it was a bit like being in Essex (now that summer is over, everyone is back in town). We ended up back at DIFC at Caramel – much better! We had a couple of drinks there and then decided it was time to go home. We were both hungry by this time and decided to stop at Burger Fuel on Sheikh Zayed Road. We both ordered the Hot Rod (beef, sliced jalapeno peppers, melted Cheddar, salad) and fries. It was the best damn burger I’ve had in a long time!

I spent all of Friday at home in my pajamas.

I had a lot of work come in this week so spent most of Saturday at home working too. A friend and I had booked massages at Spa Zen at the Radisson Royal – I had two vouchers for AED100, one of which was expiring soon and wanted to use up. The massage was great, as always. It was almost 6:30 when we finished so we decided we’d go up to Icho, the bar on the 51st floor. Being a Saturday evening it wasn’t very crowded so we sat at a table near the bar. The waitress told us that it was happy hour until 8pm and they were offering 50% off some of their wines. Excellent! I asked her what time happy hour began – she said they had happy hour every day from noon till 8pm! That’s good to know! We had two glasses of wine and then our friendly waitress convinced us to split one glass between us (I think she just wanted to finish off the bottle) – but when she poured the wine, the ‘half’ glasses were as full as the two previous ones! Our bill came and we paid just AED70 each. I was home by 9pm, had some dinner and did some more work before getting into bed.