While I was in London I didn’t do much exercise. The first few days I was there I did a lot of walking, but once my parents arrived there was just no time – it was a chaotic trip.

I got back after almost 4 weeks but for the first week I was exhausted. It was also a long weekend and Diwali so I had a few more late nights here. I thought I’d ease myself in gently, starting with a yoga class on Tuesday. Minor setback though – I’d been at a party the Saturday before and when I left, I slipped and fell flat on my ass. Yes, it sounds funny – and I thought it was at the time – but I bruised my tailbone. Not so funny. Moving from a sitting to standing position and vice versa was painful. Apart from that, I was fine.

My yoga class was fine – we didn’t do the shoulder stand, but the rest of it was OK.

On Thursday I had my first session with Randy after a month. I had to switch to Thursday as my Arabic class has started again. I told him I’d bruised my tailbone so he went a bit easier on me. I did my 5-minute warm-up on the cross-trainer and then began the first circuit:

I did that circuit three times. Randy had asked me to do full sit-ups instead of the toe reaches but my range of motion was quite limited due to my tailbone so we switched to the toe reaches. After the third set, I did 3 minutes on the cross-trainer and had a break.

The second circuit consisted of:

I did that three times with a break in between each set. Randy stretched me out and I was done.

I was supposed to do some cardio over the weekend but that didn’t happen!

Low point of the week? Injuring my tailbone.

High point of the week? Getting back to the gym!

Weight loss? None! I put on 2 kg while I was on holiday and trying hard to get rid of it now! 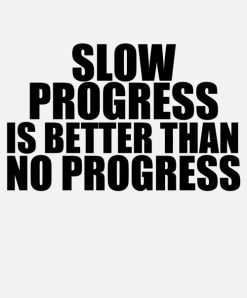