Happy new year! Wishing you all the best for 2014! 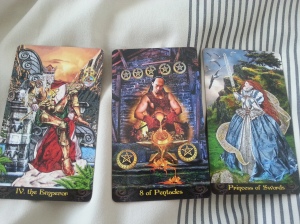 5 of Pentacles – experiencing hard times – running into material troubles, feeling insecure, struggling to make ends meet; suffering ill health – feeling run down and tired, getting medical attention, neglecting your body and its needs; being rejected – having the door slammed in your face, feeling excluded, lacking support

The Hanged Man – letting go – accepting what is, ending the struggle, giving up control; reversing – turning the world around, seeing from a new angle, overturning old priorities; suspending action – giving up urgency, living in the moment, pausing to reflect; sacrificing – putting self-interest aside, putting others first, giving up for a higher cause

The Star – regaining hope – having faith in the future, thinking positively; being inspired – realising an inner strength, regaining motivation; being generous – wanting to give or share, offering with no reservations; feeling serene – experiencing peace of mind, being tranquil amid trouble

Ace of Cups – using emotional force – getting in touch with your feelings, expressing deep feelings, empathising with others; developing intuition – going with your gut reaction, enhancing your psychic awareness, trusting your inner voice; experiencing intimacy – falling in love, getting close to someone, going to a deeper level; proceeding with love – expressing affection, giving to those in need, getting rid of negativity

10 of Swords – bottoming out – having nowhere to go but up, knowing it’s darkest before dawn, being at the lowest point; feeling like a victim – bemoaning your fate, seeing life as hostile, suffering from an attack; being a martyr – putting your own interests last, being self-deprecating, feeling like a doormat