After the craziness of the week before, this week was quite the opposite.

I woke up on Sunday with a scratchy throat. I knew I was going to get sick soon. I left home at about 1pm to deposit a cheque at the new bank where we have our business account. We used to be with Standard Chartered but they closed our account in November last year (but that’s a whole other story). I wasn’t sure how long it would take, and the queue was horrendous when I got there. The waiting area reminded me of an airport lounge – some people looked like they’d been there for hours. Fortunately, the lady at reception told me there was a separate desk for cheque deposits and I was at the bank for all of 5 minutes.

I was meeting my cousin for lunch at Jones the Grocer and I was about 30 minutes early. He was just visiting on his way back to New York and wanted to have a late lunch. I got a table, ordered a fresh orange juice and made myself comfortable with my book. When he arrived, we ordered our food – I had the Jones wagyu burger with truffle mayo (they’d run out of truffle-infused brie) and some fries. He ordered the chargrilled harissa chicken. I also ordered a flat white coffee when we’d finished. After lunch he came over for a while to meet my parents and then went back to his hotel.

That night my mum wanted the three of us to go out for dinner so we went to Madeleine Cafe at the Dubai Mall. As usual, there were several sports cars parked outside the main entrance.

And once inside the main entrance, there was a Breitling promotion in the atrium.

I’d never eaten at Madeleine Cafe but my parents wanted us to go somewhere different instead of the usual Wafi Gourmet and PF Chang. I had the goat’s cheese salad to start with, Mum had the escargots and Dad ordered a French onion soup. For my main course I ordered the tagliatelle with salmon, Dad ordered the vegetarian pasta and Mum wanted the quiche Lorraine. While we were waiting for the main course, the Burj Khalifa LED show started. It was the same as the show on New Year’s Eve, but without the fireworks. 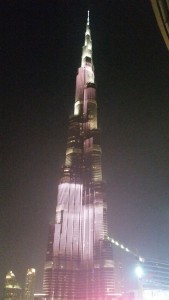 Our main course arrived, but they’d forgotten my mum’s quiche. We were eventually told that they’d run out of quiche and had forgotten to tell us. Mum was actually relieved as the escargots had been quite filling. She had a bit of pasta from me and some from Dad. They also wanted dessert and ordered the Fraise Melba – vanilla ice cream with strawberry sauce and whipped cream. I was so full I couldn’t even bear to look at it. We walked around for a while after dinner, trying to digest our food.

I had another friend in town from London. She was staying with other friends but we’d arranged to have a spa day together on Monday. I’d found an Entertainer 2-for-1 voucher for the spa at the Oberoi in Business Bay and booked two 1-hour massages for 4pm. I wasn’t feeling great – my throat still felt scratchy but I didn’t want to cancel. We met at 1pm at the hotel and went to the poolside. It wasn’t too busy and we were shown to two sunbeds. The weather was lovely and the pool area basked in the sunlight for the whole afternoon.

After we sat down, the pool attendant came over to us with two bottles of complimentary water, two complimentary Evian facial sprays and even complimentary sunscreen (but we’d brought out own). We ordered some lunch. We decided to share the chicken wrap and the cold mezze platter.

The food was delicious. After a while, the pool attendant offered us and the other sunbathers frozen fruit pieces served in large martini glasses – also complimentary. We went in for our massages – I opted for the Balinese massage and my massage therapist Ina was actually from Bali. I think she was surprised when I spoke to her in Indonesian… The massage was excellent and Ina gave me some ginger tea with honey for my throat when I was finished. I didn’t want to leave.

But I had to. I got home and got into my pajamas.