I felt much better on Sunday after being sick for most of the previous week but I didn’t really have anywhere to go so I stayed in all day.

I had dinner at La Petite Maison on Monday night with some friends. One of my friends was in Dubai for work for one night only and I’d booked a table last week for five people. On Sunday we discovered we would be eight people and changed the reservation accordingly. By Monday lunchtime ten people had confirmed they were coming, but the restaurant said we’d have to squeeze in as their largest table was already booked.

Everyone was on time, which was impressive. I’d decided I wasn’t going to drink as I still wasn’t 100% better and wanted to take it easy. I ordered the starters for the table: pissaladiere, crab and lobster salad, lentil salad, escargots, yellowtail carpaccio and burrata. We also shared the main courses: grilled entrecote, salt-baked sea bass, vegetarian gnocchi, pasta with beef ragout, truffle risotto and another truffle pasta. The food is always excellent there. For dessert we shared two cheesecakes (amazing), two pain perdus and one tiramisu.

I’d decided that I needed to get back into my routine this week – I’d had enough of flu and sitting around so I had my yoga class on Tuesday morning and I had a session with Trevor on Wednesday.

On Wednesday afternoon, I met up with Chandra, a yoga teacher, for lunch at The Roseleaf Cafe at the Dubai Garden Centre for lunch. I’d only been there once before for one of her full moon yoga classes and that was back in September last year. The Roseleaf Cafe is lovely – and very busy! I ordered a toasted tuna mayo sandwich and a Green Machine smoothie (spinach, mango, pineapple and flax seeds).

Later that day, I had my first piano lesson in almost a month. And of course I hadn’t practised in all that time. Ovidio gave me something new to work on (Say Something by A Great Big World and Christina Aguilera). We also went through what I’d been doing last time (Firework by Katy Perry, one of his own compositions and Debussy’s Arabesque 1).

On Friday I met a friend for lunch. I went over to his flat in Downtown Dubai – he’d just moved and wanted to show me the place. We had lunch at Maison Bagatelle – which I always enjoy. I know the restaurant gets very mixed reviews but I haven’t had a bad meal there and the service is always good. I ordered the chicken quinoa salad and a carrot/orange/ginger juice and my friend ordered the eggs Benedict and some water. The waiter brought our drinks with a basket of bread and olive oil and balsamic vinegar, and about 10 minutes later our food arrived. We ended up sharing a slice of carrot cake for dessert and had some coffee too. The only thing that was annoying was the amount o flies buzzing around. I didn’t remember it being like that any time before – and we eventually complained. The waiter brought over two candles for our table (but does that really work??).

After lunch we went to Global Village. Neither of us had been before and really weren’t sure what to expect. We got there at around 4pm, just as it was opening. Entry was AED15 each and each ticket had a token which you had to scratch to reveal what you’d won. My friend won a two-for-one voucher on any ride, and I won AED10 off in a participating restaurant if we spent a minimum of AED60. As we walked in, very loud Indian music was playing and there were juice stalls on the side of the path – I felt like I was in India. The first pavilions and buildings we passed were UAE, Saudi Arabia, Kuwait, Iran, Qatar, Yemen – these were all near the entrance. We then came to a square and I made an attempt to use the ‘panorama’ setting on my phone:

I was standing in front of the Chinese pavilion. 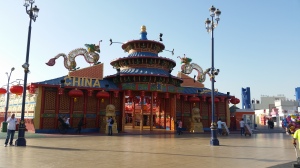 I noticed several countries had their own areas, but there was one pavilion simply called ‘Africa’. Really?? How offensive.

It reminded me a bit of Epcot in Florida – but a sad imitation. We walked through the Italy pavilion – there was a gelateria, a stall selling different kinds of pasta and the rest was all complete crap. We walked through Cambodia which was even crappier – baseball caps, sunglasses, mostly junk.

We walked over to Fantasy Island where all the rides and games were. My friend wanted to go on a ride called ‘2 Extreme’ but there was no way I was getting on that. I was still full from lunch and the thought of being flung around through the air did not appeal to me. I settled for a ride on ‘Wheel of the World’ – it was basically a giant ferris wheel and I knew the views from up there would be good.

You can just about see the Burj Khalifa in the distance, just to show you how far out of the city we were.

On the other side of the ride, there was nothing but sand. We could see a turquoise arena in the middle of the desert, which I later found out was the Hamdan bin Mohammed bin Rashid Sports Complex.

We went around twice on the wheel and then my friend decided he was going to go on ‘2 Extreme’. He was the only one on the ride and I’m glad I didn’t go. It swung back and forth, gradually getting higher and higher until the arm swung right over the top to the other side – and it seemed to go on forever.

He looked relieved when it was over. We walked around a bit longer and then decided to call it a day. It would be a fun place to go back with friends and go on some rides together. And we were there as they opened so there were no queues for any of the rides. There were also rides and games for kids – something to consider when my sister is here next!

We were home by 6pm and I stayed in that night. I was home all of Saturday and then met up with a friend for dinner.

We went to Pai Thai at the Al Qasr Hotel. We were seated at a table in a corner by the water. We ordered two starters (grilled chicken salad and grilled prawn and lemongrass skewers) and two main courses (steamed sea bass and red prawn curry) with steamed rice. Neither of us was drinking so we stuck to water. All the food was excellent – the portions were large and we were really full by the end of it. The red prawn curry was so tasty – it didn’t taste like any red curry I’d had in the past, and the size of the prawns were unbelievable. The service was really good too – until the end. I couldn’t eat any more so I put my cutlery down. Not even one minute later, the waiter took my plate. He tried to take my friend’s plate too, but he hadn’t finished eating. This happened again five minutes later. And again five minutes after that! It was so annoying – and when I got the email survey the following day I mentioned it a couple of times. Apart from that it was a lovely evening – and I would go back.