I had a busy week with work and most of my plans to attend Art Dubai went out the window.

I had a session with Trevor on Sunday and then decided I was going to finally open my new laptop! Later that day I went to Spa Zen at the Radisson Royal for a massage. I wanted to use my Entertainer voucher before it expired at the end of March – they give a gift voucher which you can use for the second massage. The week before I’d been to the Oberoi and they told me I’d have to take the second massage before the end of March as that’s when the Entertainer voucher expired. I was prepared for the same thing to happen at the Oberoi, but instead they gave me a voucher valid for six months! Awesome – so I didn’t have to rush to use it (although I was fully prepared to squeeze in another massage before the end of the month).

I worked all day on Monday. I’d wanted to go to Art Night at DIFC but had too much work to do. I still had work to do on Tuesday but some friends of ours were in town so my dad and I took them out for lunch. We went to Don Alfonso – I’d been raving about it so much that Dad wanted to try it. We got there a little after 1.30 without a reservation and were shown to a table. I have to say it’s much more crowded at lunch than it was the last Thursday evening. They had a set menu for lunch. 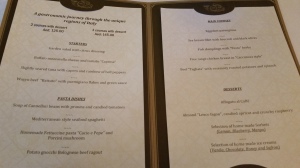 I thought that AED125 for two courses and dessert was very good value for money! I started with the seared tuna and capers (I love capers) – our friends ordered the buffalo mozzarella and tomato starter – the amount of mozzarella was huge – it was about the size of a tennis ball! For my main course I had the beef tagliata. 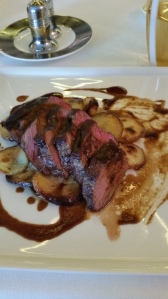 It was excellent. I was full after that but as dessert was included we ordered a few things to share, including the almond lueco fagon – the waiter told me it was similar to cheesecake (it wasn’t, but it was still good). 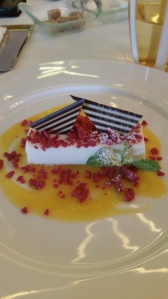 After lunch, I went to Holland & Barrett at Citywalk. I wanted to pick up some vitamins and the other things Dr Leila had mentioned in her talk the week before. I bought three things: a Holland & Barrett multivitamin for women, Omega 3 capsules and a probiotic. The total for those three things was AED360 – so expensive! I think I’ll have to stock up the next time I’m in London… After leaving there, I went to Boots next door and that’s when I discovered that instead of giving me AED140 in change, the shop assistant at Holland & Barrett had only given me AED90. So I went back, fully prepared for an argument. I told her what had happened and she just handed over the other AED50. Had she done it intentionally? I never check my change – perhaps I need to start!

It was almost 5pm by the time I got home and I finally settled down to do some work.

After my session with Trevor on Wednesday morning, I worked all day. And I mean all day. I cancelled my piano lesson that afternoon and knew I wasn’t going to make it to the opening night of Art Dubai which I’d been looking forward to. After last year, I somehow managed to make it on to the Collector’s Circle VIP list and wanted to make the most of all the talks they were holding! But work comes first.

I finally made it on Thursday. Some friends and I had decided we’d meet for a late dinner so we could have a look around Art Dubai beforehand. With various work commitments and traffic, it was almost 9pm by the time we got to Madinat Jumeirah and I noticed that they were closing at 9.30pm! I didn’t think we’d have enough time but in retrospect I think that’s the best time to go! By 9pm on Thursday, everyone was already at the bar and the halls weren’t crowded at all – we actually managed to walk around the exhibition in about 45 minutes. There were some stunning pieces of work – and there were some which made me wonder why they were there. I loved this person in prayer but I wish I’d taken it from different angles so that the letters were clearer. 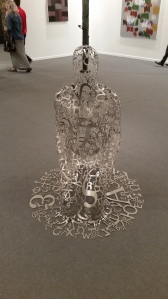 After walking around, my friend and I picked up a third friend from the Abraaj Lounge and walked over to MJ’s Steakhouse at Al Qasr where we were meeting our fourth for the evening.

We decided to skip the starters and go straight for the main course. I had the 200 g Wagyu steak and a side of macaroni and cheese (for the table – ahem). The food was delicious. We also had a couple of bottles of Shiraz – and it was a really lovely chilled evening.

It was only about 12.30 when we left Al Qasr and three of us decided to go to the Four Seasons for a drink. I hadn’t been there yet and had been wanting to see it. The hotel is stunning. We went up to Mercury Lounge, their rooftop bar. We were met with Randy Crawford’s ‘Street Life’ playing extremely loudly and one couple dancing furiously by themselves, between the bar and the lounge area. I thought they might be the ‘entertainment’ as they seemed to be very keen on the song!

After the chilled evening we’d had, none of us were in the mood for loud 80s music so we decided to try the bar in the lobby, Hendricks Bar. It was quiet and comfortable – just what we were looking for. We went through the wine list, thinking we’d share a bottle of rose but all they had was Whispering Angel (which the three of us had had before at La Serre) – either by the glass or a magnum. We certainly weren’t going to finish a magnum at that time of night between the three of us, so we ordered three glasses (at AED95 each – rip-off!). The waiter brought the magnum over with three glasses and poured it for me to try. It was nowhere near chilled and I told him so. ‘But it’s been in the fridge, madam,’ was his response. He was such a condescending shit I almost asked him whether the fridge was actually switched on. There was no doubt the glasses had been chilled, but the wine certainly wasn’t. At AED95 per glass, I expect chilled wine. We decided we’d all have a Belvedere and soda (my first vodka since 2nd January) and I asked for some fresh lime juice on the side. The lime juice never turned up and I just could not be bothered to ask for it again. We had one drink and left – it was after 2.30 by this time!

I met up with a friend for lunch on Friday. He had a friend staying with him so the three of us (and his puppy) went to Maison Bagatelle on the Boulevard for lunch. Even though it was cloudy, it was a surprisingly hot day but because we had the puppy with us we had to sit outside. I got there first and ordered a refreshing cucumber, apple, mint and ginger juice while I waited for the others to arrive. I ended up having the nicoise salad, my friend had the full English breakfast and his friend had the tapenade and a salad. We also ordered a truffle mac and cheese to share.

After lunch, we walked back to his place. The Classic Car Festival was on so we saw a few rare cars and then decided to walk through Burj Park. We opened a bottle of wine at his place, watching the activity on the Boulevard. 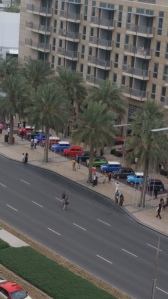 I went home after that. My mum arrived that evening so my parents and I stayed in for dinner and ordered some Chinese food.

I was home all day on Saturday. That evening, my mum’s cousins were having a housewarming at their new house in Emirates Hills. Mum was too tired to go so Dad and I went together. The dinner was outside in the garden – and it was such a lovely evening. I met some people I hadn’t seen in a while, had some dinner (catered by Royal Orchid) and was home by midnight. Perfect for a Saturday.

And that was my week!