I was up early on Sunday, like the day before. I just didn’t want to waste any time indoors when I could be outside on that gorgeous deck! I was outside a little after 8am with a cup of tea and my book.

We had breakfast at 9am (scrambled eggs, bacon, croissants) and then it was just me for a while.

I was feeling a bit burnt from the day before and tried to stay under the umbrella as much as possible (except when I was in the water). We had a lunch of chicken sandwiches (from the leftover roast chicken the night before). I carried on reading while everyone else napped. I had the place to myself again…

We left at around 4pm to head back to Kingston as my brother (S) didn’t want to drive back in the dark. What a lovely, relaxing weekend! I was seriously sunburnt though – around my shoulders and collarbone…

On Monday morning, I realised how badly sunburnt I was.

Ouch! I spent the rest of the week peeling…

My sister-in-law (T) and I took my nephew (Baby A) to the supermarket to pick up a few things for the house. That evening we went over to a friend of S and T’s to celebrate her birthday. I hadn’t met her before but my aunt was there with a couple of her friends who I’ve known for a while. It was a nice evening – we had some wine and some homemade Chinese food (excellent) and a delicious homemade coconut birthday cake too. People meet up early here so we were home by 9.30pm, even though it felt like much later.

On Wednesday morning, T and I decided to use the gym at my aunt and uncle’s place a few streets away. They have a small gym in the house – a treadmill, a bike and a cross-trainer. There’s also a small multi-gym and some free weights. My first choice was the treadmill but it was out of order. I spent 20 minutes on the cross-trainer and then did some upper body weights. It wasn’t the best workout but I was just so hot. I don’t know how anyone gets anything done here. Just behind the gym is a koi pond where Baby A kept himself entertained by feeding the fish. 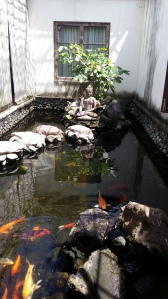 That afternoon T, Baby A and I went back to PriceSmart – T was hosting her Baby Group at home on Thursday morning and needed a few things. I’d already told her I’d be going to the office that day! Afterwards she said it had gone well and there weren’t as many mums/babies as she thought there’d be. On Thursday evening, we went over to S and T’s friends’ place (the same friends who had the birthday at their place on Monday) to play Kalooki (Jamaican Rummy). I’m not a card player and it took me a while to get my head around this – partly because the game moves really fast! The game only lasted an hour or so and we were home by 7.30 to have dinner.

On Friday evening, we went to Medusa’s Bar and Grill – just off Hope Road – they do steaks on Friday night and it’s a regular outing for S and T and a few of their friends. I thought it was a good sign that a Prince song was playing as we walked in! We each had the 10-ounce sirloin (I couldn’t finish mine) which came with French fries, sour cream, Scotch Bonnett pepper and a few other toppings you could choose. We had a few drinks as well – and we were home by 9.30pm.

We lazed around on Saturday and then popped in to see my aunt in the afternoon. She had some other friends over too and we had a few bottles of wine between us! S, T and I dropped Baby A back home and then went to Roe for dinner. To start with, we had fried crab sticks, a garden salad and shrimp gyoza; for our main course we shared the crispy tuna roll and pork ginger. I think there was one more roll, but I can’t remember what it was. I also had another glass of wine. We were home early and T and I sorted out our packing for the following day. We were driving to Old Fort Bay near Ocho Rios for a 3-day yoga retreat (the same one I went to the year before).