My sister-in-law (T) and I left Kingston at around 11.30am to head to Old Fort Bay near Ocho Rios. The drive was lovely – as we went through Sligoville and on to the highway. We didn’t hit any traffic and were at Scotchie’s by 1.15 in time for lunch! We had some jerk chicken and coconut water – and then went on to Old Fort Bay which is just 5 minutes from there.

We were spending three nights at Old Fort Bay on a yoga retreat, the same one I did the year before. We were at Old Fort Bay Cottage by 2pm and were met with cold towels and a hug from Chandra, the yoga teacher and organiser. This year, it was just T, our yoga teacher, a girl from Vancouver and me. As the cottage wasn’t full, T and I were able to have separate rooms with a shared bathroom. We were all at the beach by 2.30pm.

I think this is one of the nicest beaches I’ve ever been to… We had a gentle yoga session in the garden followed by dinner of coconut fish curry and rice. It was delicious. We also had a couple of bottles of wine and T and I tried to teach the other two how to play Kalooki. The game that took an hour in Kingston took over 2 hours that evening! We all went to our rooms at around midnight.

I slept so badly. I was so hot. The fan in my room didn’t reach the corner of the room where the bed was. At around 2.30am I decided to move the bed but the wooden frame was so heavy, I barely moved it a few inches. Still, it was better than no air and I did eventually fall asleep.

I woke up drenched in sweat and couldn’t wait to get to the beach for our yoga session. It was very windy that morning though – and the corners of our mats kept getting blown over! It was a good session though – and I enjoyed rinsing the mat (and myself) off in the ocean afterwards.

We went back to the cottage for breakfast (scrambled eggs and toast) and at about noon I decided to take a nap. The others walked to Laughing Waters, a private waterfall about 20 minutes away. I was tired and had a bad headache so I decided to skip it – I’d been there last year so I didn’t feel too bad about missing out. I’d also moved the bed closer to the fan so I could be more comfortable.

At around 3pm, I got up and went to the beach. There weren’t many people around as it was a Monday, but the beach was beautiful. I noticed a small sand crab not far from where my sunbed was and spent a while watching it. It crept out of its hole towards various objects, and then quickly grabbed them and scuttled back to its house. And then it did the same thing over and over again. It was fascinating to watch. This little guy knew exactly what he was doing with his life! I continued watching him until a wave went over his little burrow – and he didn’t come out again. Aren’t they somehow waterproof??

The others came back from Laughing Waters at around 4pm and we relaxed at the beach for a while longer. After dinner (mango shrimp and rice and callaloo) we went back to the beach for a moonlight walking meditation. We just walked along the shore, we could go into the water if we wanted to, we could do anything we wanted but we couldn’t speak to each other until we were back at the house. We had an early night that night and I slept soundly.

It was really hot on Tuesday and yoga was tough, even at 8.30am. The breeze from the day before had disappeared and the water was much calmer too.

After our breakfast of saltfish and ackee and plaintain, we went back to the beach and floated around in the waves for a while. I even saw two small fish right next to me and was so surprised to see them that my sudden movement scared them off. We spent most of the afternoon at the beach – I dozed off on my sunbed for a while. At about 4pm, T and I went to the craft market in Ocho Rios. She wanted to get a drum for my nephew (Baby A). Chandra came with us as she was looking for paintings for the cottage. It was hot in that market though – I couldn’t wait to get out of there. We had our evening yoga session on the beach, watching the almost-full moon rising while the sun was setting. Magical.

Dinner that night was fried chicken, macaroni and cheese, and bammy (cassava). The cook, Ms June, also made us a ‘special’ cake. Forget about being ‘special’, the cake itself was unbelievably light and fluffy. I only had one piece though, which was enough for me. I was in bed, reading, quite early that night.

When we got to the beach on Wednesday morning, the tide was really high. We barely had enough space for our yoga mats – and Chandra did get wet a couple of times. My mat was fine until the very end when I was lying in savasana, and suddenly felt water creeping up to my waist. It was such a welcome relief from the heat that I started smiling. After our customary dip in the water, we went back to the cottage for breakfast – scrambled eggs, sausages and toast. T and I got our stuff together, and were headed back to Kingston by noon.

That evening, we went over to my uncle and aunt’s place for a little while and then came home for dinner.

On Thursday, T and I took Baby A to PriceSmart for the weekly groceries and then I caught up on some work as I hadn’t done anything all week. I had a really lazy Friday – I read my book for most of the day and had a mani/pedi.

On Friday night, we met up with a couple of S and T’s friends. We had dinner at Taurus Court restaurant in Musgrave Commercial Centre. The service was average – and we waited a while for the food. But it was so worth it. S and I shared a hot and sour soup – and we both agreed that it was excellent. We also had malah shrimp (disappointing), Thai style chicken (good, but not really Thai – more like chicken with cashew nuts), roasted char siu (not bad) and pan-fried spare ribs with garlic (amazing). I was so entertained by the menu: 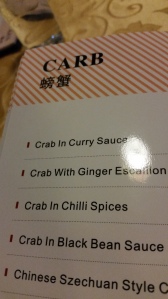 I could have changed every single page of it!

After dinner we went to a bar called CRU – it’s a really nice rooftop bar, and it was packed. The music was good, the drinks were good, the company was fun. It was also my latest night out and we were home at 2am.

Saturday was really lazy. T took Baby A for a swim in the late afternoon but I didn’t get ready until 5pm. That night we went over to one of S’s friends for a barbecue. We were the first ones there and we were on time. The next person didn’t arrive until an hour and a half later and others an hour after that! Time-keeping is not one of their priorities here, clearly. The food was good though – spring rolls and crab cakes to start with, and lasagne, salad and garlic bread for the main course. We were the first to leave at around 11pm – but I’d already faded at around 9.30pm. I couldn’t wait to get into bed.