My sister-in-law (T) and I were up early as we were going back to Old Fort Bay for the day. It was an easy drive there and we were at Chandra’s cottage before 11am. We had hoped to spend some time at the beach after we’d gone through some ideas with Chandra but as soon as we got there it started raining. Boo! We didn’t see any point in sticking around and started driving back at about 2pm. When we were halfway home, it started pouring – and it carried on most of the way back to Kingston. It was raining so heavily, we could barely see a few feet in front of us.

We got back to Kingston at around 4pm and went straight over to my aunt and uncle’s place. My brother (S) had taken my nephew (Baby A) over for a swim so we stopped there and had some tea before heading home (it hadn’t rained at all in Kingston). Even though all I’d done that day was sit in the car for a few hours, I was exhausted by the time we had dinner (jerk chicken and jerk pork from Scotchie’s – yum!). I got into bed and S and T went to Dub Club with my cousin and one of his cousins – they’d just arrived early that morning.

I spent Monday at home – reading and doing a bit of work. S was home early from work so we went to PriceSmart for some groceries. I spent Tuesday at the office.

On Wednesday, T and I went to Devon House with Baby A. Entrance cost us US$6.50 each and included an ice cream at the end of the tour. Apparently Devon House Ice Cream is the fourth best ice cream in the world. It was just the three of us on the tour, which was quite nice.

Devon House was built in 1881 by Jamaica’s first black millionnaire George Stiebel. He had 99 properties – and would have probably had more but it was illegal to own 100 properties during the period). Devon House remained a residence until 1967 when it was bought by the National Trust and restored. It was declared a national monument in 1990.

We were taken through the Entrance Hall and into the Dining Room (with the original Chippendale dining table and chairs – and a print of a Velazquez painting on the wall). We then saw the Living Room which has a 17th-century Venetian mirror in it. The Games Room had a bagatelle table, backgammon set and a folding card table. We saw two bedrooms and their ensuite bathrooms, the Sewing Room and finally the Grand Ballroom. It was spectacular! 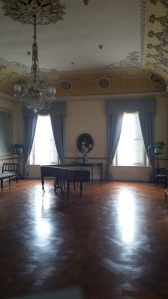 The chandelier is the original one that George Stiebel bought for the room. The Wedgewood ceiling is also the original ceiling of the House. There was a Broadwood piano, said to be one of the earlier prototypes of the ‘piano-forte’. I asked if it was in working condition, but our tour guide said it wasn’t. 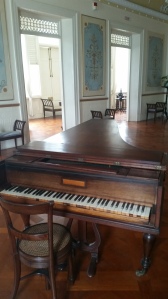 Our tour guide explained that the kitchen and stables used to be where the restaurants and shops now are, in smaller buildings located around the Great House. The Grand Ballroom was the end of our tour so we went back downstairs and decided to get some ice cream. I tried the coconut flavour and T had the Rocky River. Considering we got one scoop each, it was a really big scoop! We had to eat it fast though – or it would have melted in no time. When we were finished we walked around the shops for a while and I picked up a couple of scented candles from Starfish Oils.

On Tuesday night we went over to my aunt and uncle’s for dinner. We had a few drinks as well but it wasn’t a late night.

On Wednesday, T, Baby A and I went to the Tea Tree Creperie on Lady Musgrave Road for lunch. We couldn’t decide what to have so we ordered two and shared them. We had the Brie and Pesto crepe with mushrooms and the Ham, Swiss and Asparagus crepe. They were both so good. For dessert we shared the Tiramisu crepe.

On Wednesday night, T was out with a couple of friends so S and I had dinner with our cousin and his cousin at Market Place. We sat outside at East, the Japanese restaurant, because we also wanted to order some food from China Express. We were so full by the end of dinner! Not to mention hot – because there was no breeze whatsoever where we were sitting.

I was home on Thursday, reading mostly and doing some work. I’ve really managed to get through a lot of books while I’ve been in Jamaica – it’s been great.

On Friday afternoon, we went over to my aunt and uncle’s. T took Baby A for a swim while I read my book. We went home for a while and ended up having dinner there that evening before heading to a friend’s birthday party at Tracks and Records (Usain Bolt’s bar). I was hoping he’d be there, but sadly he wasn’t. I did see Sean Paul though – I met him briefly last year (at the same friend’s birthday party). Anyway. I ended up having way too much rum and coconut water.

I spent most of Saturday in bed. S went to Maiden Cay on his friend’s boat, T was in and out with Baby A, and I just chilled at home. It was a waste of a day, to be honest – but it’s not like I had anything else to do!