Hello from London! Have a wonderful week…

The High Priestess – staying non-active – withdrawing from involvement, being receptive to influence, waiting patiently; accessing the unconscious – using your intuition, trusting your inner voice, being aware of a larger reality; seeing the potential – allowing development, opening to what could be; sensing the mystery – opening to the unknown, seeking what is concealed, looking beyond the obvious

Queen of Pentacles – being nurturing – giving love and support, making people feel better; being big-hearted – giving freely and abundantly; being down-to-earth – handling problems matter-of-factly, taking a simple and sensible approach; being resourceful – making a little go a long way, being handy and versatile; being trustworthy – being loyal and steadfast, keeping confidences and secrets

9 of Swords – worrying – doubting all will go well, going over and over an issue, getting worked up; feeling guilty – wanting to turn back the clock, being hard on yourself, getting overwhelmed by remorse; suffering anguish – feeling you’ve reached your limits, having sleepless nights, wanting to cry

8 of Wands – taking quick action – making your move, putting plans into action, rushing into a new area; coming to a conclusion – closing out an activity, completing unfinished business, having all elements come together; receiving news – getting an important message, finding the missing puzzle piece, having a meaningful conversation

The Sun – becoming enlightened – finding the sense behind the chaos, getting to the heart of the matter; experiencing greatness – being singled out for notice, becoming the centre of attention; feeling vitality – experiencing joy, feeling invigorated; having assurance – knowing you can succeed, trusting your abilities

The Hanged Man – letting go – accepting what is, ending the struggle, giving up control; reversing – turning the world around, seeing from a new angle, overturning old priorities; suspending action – giving up urgency, living in the moment, pausing to reflect; sacrificing – putting self-interest aside, putting others first, giving up for a higher cause

9 of Wands – defending yourself – being paranoid, protecting others, feeling wary and guarded; persevering – trying repeatedly, keeping your resolve, refusing to take ‘no’ for an answer; showing stamina – holding fast, keeping up the pace, continuing despite fatigue

Princess of Cups – being emotional – being moved or touched, letting your feelings show, being sentimental or romantic; being intuitive – acting on a hunch, trusting your gut reaction, having a psychic experience; being intimate – starting or renewing a love affair, getting closer to someone, solidifying a friendship; being loving – forgiving yourself, forgiving someone who has hurt you, mending a broken relationship 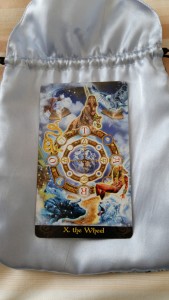 The Wheel – feeling a sense of destiny – using what chance offers, finding opportunity in accident, altering the present course; being at a turning point – reversing, having a change in fortune, being surprised at a turn of events; feeling movement – being swept up in new developments, getting involved, experiencing change; having a personal vision – seeing how everything connects, becoming more aware, expanding your outlook

3 of Wands – exploring the unknown – expanding horizons, leaving the secure behind; having foresight – getting a premonition, being visionary; demonstrating leadership – assuming a responsible position, showing others the way