So, after that one Zumba class in Jamaica I did nothing for a few weeks!

It was just too hot in Kingston and in London I was just too busy. I was walking a lot and I thought that might make a difference, but when I got back to Dubai I weighed myself. I’d put on 1.4 kg in eight weeks. It could have been a lot worse, I suppose! I ate really badly when I was in London for the last ten days of my holiday – pizza, chocolate, wine.

The good news is that in the six days since I’ve been back I’ve managed to lose almost 1 kg already – just by being back in a routine of sorts.

The bad news is that I’m going to have to find a new trainer. Before I left, Trevor told me he’d been promoted and would be managing a new branch of Fitness First – he didn’t think it would make any difference to our sessions. Now that I’m back he’s discovered he has no time… He says he’ll finish off our package (there are only three sessions left), but what a shame! I enjoyed training with him. I’ve been given the number for a new trainer from a friend (in fact, Trevor recommended him to her) and will call him in a couple of days.

Low point of the week? Weighing myself after two months!

High point of the week? Being back home and trying to get back into a routine. 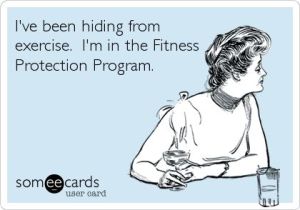