My parents and I left for Bombay on Sunday afternoon as my dad was supposed to have surgery. They were travelling in First Class and I was in Business Class (the perk of travelling with my parents!) so we had two Emirates cars take us to the airport. (I think there were two cars because my booking was made separately, but it really wasn’t necessary to have two cars.)

We got to the airport – check-in was easy, security was easy, immigration was easy. Everything was so easy! Dad had requested a wheelchair and we were taken straight to the First Class lounge. We hadn’t had breakfast so we sat in the restaurant. I had a cheese omelette and chicken sausages, and Mum and Dad both wanted smoked salmon. After breakfast, we moved to the lounge area. I read my book with a cup of tea, Mum went to the Duty Free shops and Dad played on his iPad.

We boarded the flight and got to Bombay without any problems. It wasn’t a long flight, but I was pretty tired when we landed. The cabin crew didn’t have any landing cards so we had to fill them in when we landed (what a waste of time) and it was a really long walk from the plane to Immigration! Our luggage was out in a matter of minutes and we got in our Emirates car and took Dad straight to the hospital. Dad was admitted that evening and Mum decided she’d stay there with him so she could meet the doctors when they did their rounds early in the morning. My grandmother also joined us there and I went home with her when she left.

My mum’s two sisters-in-law were also staying at home. I hadn’t seen one in seven years and the other in four years. They’d moved into one room so that there would be space for my brother (S) (when he arrived) and me. One of my aunts was moving into her daughter’s place the next day as she was babysitting her grandchildren while their parents were away. So I had a room to myself for a couple of nights, which was nice!

I hadn’t been to India in five years. It seemed more crowded – more traffic, more people in the streets, more car horns (which drove me nuts).

The first two days were spent going from the house to the hospital. On Monday and Tuesday I had lunch at the hospital with my parents and would go home in the evening with my grandmother when she came to visit my dad.

On Tuesday night, my mum and I went to pick up S from the airport. He’d had a really long journey – Kingston to Miami to London to Bombay. He left Kingston early on Monday morning and got to Bombay late on Tuesday night. We dropped my mum off at the hospital on our way home and were surprised to find my grandmother waiting up for us. It was after 1am but she hadn’t seen S since his wedding. By the time I fell asleep it was after 2.30am.

Dad had his surgery on Wednesday morning and once he was in the recovery room there was no point in us hanging around. Mum, S and I went to Royal China for a late lunch. The food was excellent – we had hot and sour soup, char siu pau, prawn and chive dumplings, har gau, char siu cheung fun and a couple of other things. It was so good. After that I just wanted to take a nap. My mum, grandmother and I went back to the hospital to visit Dad in the ICU. S had passed out and when we tried to wake him he told us go without him. An hour later, while we were at the hospital S sent me a text: ‘Where are you?’ At the hospital, I replied. ‘Why didn’t you wake me??’ Err, we did!

We were at the hospital on Thursday when one of my mum’s cousins invited us to the National Sports Club of India (NSCI) for lunch. We had lunch at their Maharaja restaurant – they do Indian and Chinese food and we ordered a bit of both. The food was really good. After lunch, my cousin took us on a tour of the facilities – the place is huge! Tennis, swimming, squash, table tennis, it’s all there. They also have the largest gym in Mumbai – there were at least fifteen treadmills along one wall. It wasn’t very crowded either – but I guess it was 4pm so not peak time yet. After lunch we went back to the hospital to see Dad for a while.

Dad was discharged from hospital on Friday so while they were getting his paperwork in order, S and I went to Crossword at Kemp’s Corner to do some book shopping. I bought eight books (just what I need!) and S bought a few too. When we were done, we called our parents to see whether they were ready to leave. Mum said Dad was having a nap and that we should have lunch there. Just a few doors away from Crossword we found a restaurant called Pizza Metro Pizza. S ordered the ‘Diavola’ (mozzarella, tomato, salami, basil, mushrooms and chilli) and I had the ‘Capricciosa’ (mozzarella, tomato, ham, salami, black olives and mushrooms). Just as we were finishing our coffees, my mum called to say they would pick us up on the way home. Perfect timing!

We got home and hung around for a while. As both my parents were home, there was no space for all of us so S and I had booked a room at the Trident Hotel at Nariman Point. We checked in on Friday afternoon, unpacked and relaxed for a while. On the 30th floor, you could hardly hear the traffic and car horns. And the view from our room was spectacular. 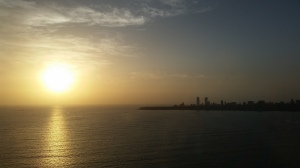 On Friday night two of my cousins took me out for dinner. We went to Indigo Deli in Colaba for dinner and had to wait for a table. We eventually got one and ordered some wine and food. We shared a starter – cheese and spinach souffle. For my main course I had the ravioli with salmon and artichokes. One of my cousins had the chicken Sloppy Joe and the other had a steak (I thought beef was banned in Maharashtra??). The food was really good and we were too full for dessert. After dinner, I went to meet S and a friend at Dome, at the top of the Intercontinental Hotel on Marine Drive. We had a bottle of wine and sat there for the longest time. The place was empty, the music was too loud and having a false roof on top of an open air bar just isn’t right (whether or not it’s monsoon season). We didn’t get back to the hotel until 3am.

I woke up on Saturday feeling so tired. S and I went home for lunch and to hang out with the family. That evening S decided to stay in and I went to our friend’s place for drinks. He’d invited a couple of other friends whom I knew so it was nice to catch up with them after a long time. After drinks at his place we went to Aer at the Four Seasons. I’m sure it’s a beautiful place but, again, with the false roof it was hot and muggy (my hair looked like Diana Ross’ hair when I left) and should really be called ‘No Aer’ during the monsoons. It’s also really expensive! One Belvedere with soda and one glass of white wine cost 2400 Indian Rupees (almost £24)! I bumped into a few friends from London who now live in Bombay so it was nice to see them. I didn’t get back to the hotel until 3.30am and I was exhausted.