I met a friend for dinner on Sunday night. He was visiting from Bombay and I hadn’t seen him in a few years. We met at Rivington Grill at Souk al Bahar. We met at 7.30pm and the restaurant wasn’t very busy but by the time we left at 9.15pm it was packed. We skipped the starters and just had a main course each. I had the fish and chips, he had the steak. I also had two glasses of wine (he abstained). We shared a dessert – some chocolate/caramel pie thing. It was average – I’d asked the waiter if they had any apple crumble but he said it had been taken off the menu. I dropped him off at his hotel and was home by 10pm.

I was home all day on Monday until the late afternoon. I had two vouchers for a massage at the Shangri-La Spa which were due to expire soon so I used one of them. The massage was so good. I hadn’t realised how tight my shoulders and lower back were and the massage therapist spent most of the time working on those areas.

On Tuesday evening, I met my cousin for dinner at Hoi An at the Shangri-La. The food and service are consistently excellent and we go there a lot. Of course, it also helps that we get 20% off with the Essence card!

On Thursday I met a friend for lunch at Coya. I hadn’t been there yet and was looking forward to it. Our table was booked for 1pm and I was the first to arrive – not just at our table, but in the entire restaurant! 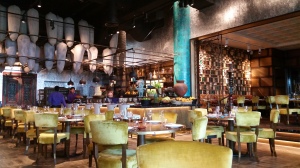 My friend arrived and we ordered a pisco sour each. And then we looked at the menu. We ended up going with the set lunch menu: we each ordered differently so we could try a few things. We had the salmon nikei and tuna tiradito to start with. Then came the sea bass tequenos and beef anticuchos. And then we had the chicken and the salmon. Of course we were still drinking through lunch. After our pisco sours, we ordered a sake each (which came in a wine glass). And after that we switched to white wine. We could have carried on drinking but I had to run a couple of errands with my mum!

After the errands with Mum, I was home for about half an hour and then had to go out for dinner. I met up with some friends at their place and had a few drinks. We then went to The Eloquent Elephant at the Taj for dinner and more drinks. It was crowded and noisy and I have to say I’m not a huge fan of the place. I was home by midnight.

On Friday evening I went to visit some friends and their new baby. I stayed for an hour, had a cup of tea – it was nice. Very chilled. After that I met a friend for dinner at Cave. She ordered the escargots and I ordered the sea bass. I would have loved to order the fondue but I wasn’t eating bread. The portion looked quite small but when I’d finished I was comfortably full, not stuffed. However, as we made our way through our bottle of wine, we both started feeling peckish again so we ordered the cheese and cold cuts platter (it was all cold cuts apart from one piece of cheese). It was a nice evening – very relaxing. And then we decided to join her partner and his friends at The Vault at the JW Marriott Marquis. It was only 10pm by this point so I didn’t think it was such a bad idea! We had one drink there and everyone called it a night.

Saturday was busy. I was trying to do as much work as possible as I was going to India the next day with my parents. I also had my last session with Trevor and a meeting with a potential client. I also had to pack and managed to do that fairly painlessly.

And on Sunday, my parents and I left for Bombay.