I woke up on Sunday feeling awful. I’d been out the night before and had way too much champagne! Any plans I’d had of going to the gym in the morning (or even getting ready) went out the window as I got out of bed at 1pm. I spent the day in my pajamas. It took me all day to edit one paper which would have normally taken me an hour. I just couldn’t focus on anything.

Monday was a bit better. I had a session with Pete, sorted out some paperwork at the du shop and then had my piano lesson. I came home after that and worked the rest of the evening.

After the gym on Tuesday, I went to the monthly lunch of the IBWG (International Business Women’s Group) at the Trade Centre Club. On the way there, I realised that I was in one of those moods where I didn’t feel like speaking to anybody. Networking was not going to be easy that day! I got there, picked a number out of the bowl (which indicates which table you sit at) and found my name tag. I said hello to a couple of people I’d met before and had a quick chat, but a few minutes later I found my table and sat down. There were two other people already sitting there so I guess they didn’t feel like networking either! Our lunch was served – I opted for the braised lamb with vegetables.

The talk that day was really interesting. It was all about posture and ergonomic work spaces. Er – if the presenter could see how I worked, she’d have been furious. I work on my bed with my back against the headrest and my legs either straight in front of me or cross-legged. I suppose it’s good that I’m not hunched over my laptop though! She went through consequences of bad posture and some exercises (which I either do as stretches with Pete or in yoga). She was an interesting lady though – and I enjoyed the talk.

After lunch I went to Mercato to pick up some Patchi chocolates and other things that my mum needed in Bombay. My dad was leaving over the weekend and she had a list of things to buy.

I came home after that and did some more work. I’d been swamped for the last two weeks or so, which is great!

It was Diwali on Wednesday, but honestly it felt like any other day. I had a session with Pete which pretty much knocked me out for the rest of the day. I was exhausted. After lunch, I worked until the early evening, fighting off the urge to have a nap. At about 6pm, Dad and I did our Diwali puja – which took about fifteen minutes – and that was that. I’d been invited to a friend’s place for the evening but Dad didn’t want to go anywhere so I stayed in with him.

The weather was horrible on Thursday morning. Five minutes of rain in Dubai means five hours of traffic. The whole city comes to a standstill – and apparently so do I. I took one look out the window and decided to stay in and do some work.

Of course, it had cleared up by the afternoon. 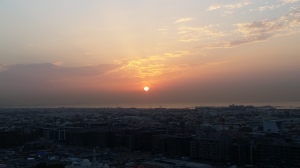 That evening I met a friend for dinner at Segreto in Madinat Jumeirah. I had initially thought I’d eat something healthy, like grilled fish, but when we got there they had a special truffle menu which included pasta with truffles. We both took one look at that and ordered it. We shared a crab/prawn starter – it wasn’t what we expected but it was OK. The pasta with truffles was delicious. We also had a bottle of Sauvignon Blanc, which was lovely. For dessert, we shared a cheese platter. I really think Segreto is one of the best Italian restaurants in Dubai – the food and service have always been excellent whenever I’ve been there.

After dinner we went to The Agency for a drink and then went to meet some friends at Cave at the Conrad. We had some more wine and at 1am, decided to head home. On the way home one of our friends decided he was hungry and wanted to stop at Burger Fuel. I hadn’t been there in ages and was also feeling a little peckish (our dinner was early – 7.30pm). I ordered a hamburgini with jalapenos – there was no way I could eat a regular burger so the mini one was just fine. I walked home after that and got into bed.

On Friday, I went to the gym in the morning. As I was walking to the Shangri-La at about 11am, I noticed how much cooler the temperature was – that rain the day before really cleared out the last of the humidity. That afternoon Dad and I went to Sakura at the Crowne Plaza for lunch with my uncle, aunt and the kids. The food was good, as usual, but it’s scary the amount of butter they put on the teppan when they’re preparing the food! I went home after lunch and did some work.

On Friday evening, I went to a friend’s birthday drinks at his place in Executive Towers. I didn’t know anybody there but him, but I’d already RSVP’d ‘yes’ and didn’t want to flake. I hate it when people do that to me, so I know how it feels! I stayed for over an hour, met some of his friends and then went to meet some other friends who were at Roberto’s in DIFC. I don’t know what it is about Roberto’s but every time I go there I just want to go to sleep. I start yawning and feel bored in general – it doesn’t matter who I’m with. Even though the bar area was crowded, it had such low energy that we had to leave after one drink.

As soon as we left – literally, as soon as we walked out of the restaurant – we were all in a much better mood! We went to La Cantine at the Jumeirah Emirates Towers Hotel and were dancing until 2am. When we left we decided to go to Zaatar w Zeit for some food. I hadn’t eaten dinner and was famished! After eating, I got home at around 3am.

I was home for most of Saturday. Dad left for Bombay and I did a bit of work. There was a gorgeous sunset that evening. I had been invited to Maya at Le Royal Meridien Beach Resort for a friend’s engagement drinks. I got there at around 6pm and stayed for a couple of hours. A friend and I decided to have dinner after drinks instead of staying on there and went to Jones the Grocer. I hadn’t been there in ages. I had the pasta with chilli and prawns – which was OK. I thought it would be better. I was home by 10pm.