I woke up on Sunday and made it down to breakfast at about 10.45. Again, I was the only person in the restaurant. I ordered a cappuccino, a coconut water and the nasi goreng. The portion was huge and I couldn’t finish it. I asked for a 1pm checkout and went to my room to sort out my packing and read on the balcony for a while, waiting to be picked up for my yoga retreat. When I was in Jamaica, I was looking for yoga retreats in Bali as I was going to be there for my cousin’s wedding in December. And I found one – Bali Goddess Retreats in Seminyak.

I was collected from Luna2 Studiotel at about 1 pm and spent the whole week at the retreat. We were there for most of the time although Wednesday and Thursday were free evenings – dinner wasn’t provided at the villa and we were able to eat out on those two nights.

I’ve learned that people who live in Bali (and many of those visiting) are really into the healing side of the island – there are a lot of healers here and the retreat leaders had a list of all their favourites and offered to make appointments for us if we wanted them. I decided to see a psychic healer/tarot reader called Sam so on Tuesday morning, one of the girls (C) and I were taken to  Canggu where she lives for our appointments. My appointment was at noon so I was dropped off while C went to have a coffee or a wander around the town.

Before I’d even started shuffling the cards, she said to me, ‘I’m picking up that you’re quite psychic yourself’. It always interests me when people pick up on this because I don’t feel psychic most of the time. I told her that my intuition only works when I don’t have a vested interest in the outcome of a situation – the more important the outcome is to me, the less I can hear my intuition. She told me I really needed to focus on developing my psychic abilities because I had the power to be a great healer. Something to think about! She told me I needed to write as that’s how I express myself. She told me that my work wasn’t very challenging (it isn’t – meeting deadlines is the most challenging part of it) but that I’d be offered a new contract soon. I told her that I’d already been speaking to a new company based in the UK (and they’ve now told me I’d be a ‘valuable asset’ to their work). She also told me I’d been thinking about moving – and I had been thinking about it over the summer, but then Dad had a heart attack and now I don’t think I can leave. She said a lot of things which were relevant to me and I was glad I went to see her.

After my session, C was dropped off and I went to have a coffee at Kitchen Rustica, an Italian restaurant. While I was in there, a guy rode up on his scooter, no shirt, bare feet, just shorts – and ordered a pizza. Only in Bali!

On Wednesday night, we went to a restaurant in Jalan Petitenget called Sardine. I don’t remember it being there the last time I was in Bali three years ago. It’s a beautiful restaurant right next to a rice padi. Me and my fellow retreat-goers (four of us in total) shared a couple of starters: the bass and long-nosed emperor sashimi and the Papua crab tower. Both were interesting but I wouldn’t order either of them again. For my main course I ordered the barramundi steamed in banana leaf. Now that was excellent. For dessert we shared the black pepper ice cream – I’ve never tasted anything like that before! It started off a little sweet and then you could really taste the black pepper coming through.

On Thursday evening, we left the villa to see the sunset from Potato Head. I’ve never been a fan of Potato Head, much preferring Ku De Ta. Potato Head was crowded and we had to wait for a table even though we were there at 5.30pm. We sat at the bar and ordered some drinks (I had the Coco Loco mocktail). 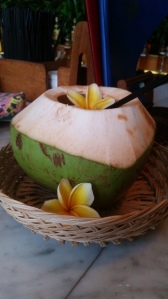 I’m sure the sunset was lovely but we couldn’t see it as a huge screen had been put up in front of the ocean. How ridiculous is that??

At 6.30pm we decided to go to Ku De Ta as we had a dinner reservation there for 8pm, but thought it would be more relaxing lounging around there for a while. We were right!

I was surprised to see that they’d installed a pool by the beach. 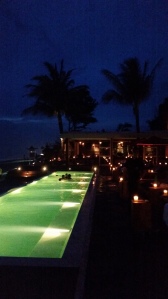 It was so much nicer than Potato Head, much more sophisticated. And we were able to see what was left of the sunset.

We decided to go to our table at 7.30pm as we were all quite hungry. Again, we shared two starters: the prawn and snapper tsiu mai dumplings and the grilled calamari. I loved the dumplings! I was tempted to order the barramundi again but I ended up sharing the roasted Balinese pork (for two people) with one of the other girls. It was fantastic – and such a huge portion that three of us could have eaten it (but we finished it!). I was so full by the end of our main course and couldn’t have dessert. The other three each ordered a homemade mini Magnum ice cream bar. I don’t know how they managed it!

Our retreat ended on Saturday and I was moving to the Sofitel Hotel in Nusa Dua. I had asked the hotel to arrange a car to collect me at 3pm but by 3.20pm there was no sign of the driver. And it had started pouring with rain – I’ve never heard thunder so loud! I called the hotel, they put me through to the transport department and I eventually got the mobile number for the driver who was totally lost (even though I’d send directions in Indonesian with the villa phone number to the hotel). Two minutes after speaking to him, a car pulled into the gang (lane). Finally! After much struggling with the umbrellas and the torrential rain and the luggage, I got into the car. ‘So, where are you going?’ the driver asked. That was weird. ‘To the Sofitel in Nusa Dua,’ I told him. ‘You booked the Uber?’ Erm. No, I didn’t. So, it turned out that a ‘Mr Nick’ had booked the Uber and was in Seminyak Square. So why the hell the car came to our villa I don’t know. A minute later, another car pulled into the gang and it was the car from the hotel. So we transferred the luggage (still in the pouring rain) from one car to the other and I was finally on my way to Nusa Dua.

The traffic in Bali is horrendous. I thought that once the underpass near Dijon Cafe had opened, the traffic would lessen considerably. If anything, it’s even worse now. And the fact that a part of Jalan Sunset Road has been reduced to one lane in each direction doesn’t help the situation. I eventually got to the Sofitel at about 4.30pm – thankfully the driver took the toll road over the water so we avoided some traffic. The driver had been hired by the hotel and gave me his business card in case I needed a car during my stay.

I checked in and went to my room. 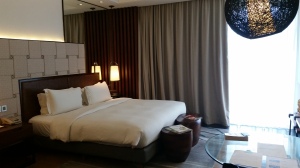 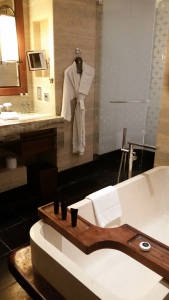 The rooms are spacious but the closet space is limited. There are only two drawers next to the wardrobe and my sister would be arriving in a few days so I had to make some space for her things too. I had a feeling this room was going to be very messy very soon! I unpacked my things and wedged my suitcase in between the sofa and the mini bar. I then called the spa to see if they could fit me in for a massage that evening.

According to the spa menu in the room, I could wear the gown in the bathroom to the spa so I did that, but then discovered I had to walk through either the crowded restaurant or the crowded lobby to get to the spa! I had a Balinese massage for one hour and stopped to check out the gym next door. I told them I’d join them for the 7am floating yoga class the next morning. From what the guy was saying I guessed that floating yoga is the same as swing yoga.

I had dinner in the Kwee Zeen restaurant that evening (and I’ve only just realised it’s pronounced ‘cuisine’). I ordered the pad thai with prawns and some water and went back to my room.