My sister and I were up early on Monday as I’d booked Pak Wayan to take us to Seminyak (yes, again). We were ready by 9.30 but by the time we’d said goodbye to our grandmother and some other relatives who were leaving straight after the wedding, it was closer to 10.30 by the time we left.

We decided to go to Jalan Seminyak this time instead of Jalan Laksmana. We walked for a little while, tried on some shoes in Kat Sweet (a shoe shop we’d been to in 2012 – the shoes are the same!), and then decided to go to Warung Made for lunch. It was noon by this time and we were hungry! We ordered chicken satays, spring rolls and mie goreng.

It was so good. The spring rolls were just average but the the other two dishes were yum.

We walked around a little longer but then I had to leave as I had another appointment with Jim in Umalas (I still think he’s amazing). While I was at my appointment, my sister had a massage at Kaiana Spa, in the same complex as Warung Made. When I got back to Seminyak, she was in a shop buying gifts and I ended up buying an incense holder and enough incense sticks to last me six months!

It was about 4.30pm by this time and we were feeling peckish again. We decided we couldn’t leave Seminyak and not go to our favourite place, Trattoria. We shared the beef carpaccio and a pizza David (mozzarella, mushrooms, artichokes, sun-dried tomatoes, fresh mozzarella and basil-infused olive oil). Oh. My. God. I could have eaten that pizza twice.

We got back to the Sofitel at about 7pm and had to get ready as we were having dinner with Harry at 7.30. After much debating we ended up going to Bali Nikmat in Kuta – one of my favourites. We were back at the hotel by 11pm.

On Tuesday morning, my sister left for the airport at about 11.30am. I had lunch with my parents before they left for the airport a little while later. I had until 9pm to entertain myself. I was able to get a late checkout at 6pm (but had to pay for it). I decided to go back to the Ritz-Carlton to do the perfume workshop. I got there at around 2pm and was seated in front of dozens of little bottles.

The lady explained base notes, middle notes and top notes to me and I then got to choosing the scents I liked. My eventual choices were: base notes – Oriental, Chypre, Smoky and Massoia; middle notes – Ylang-ylang, Champaka, Tuberose and Frangipani; and top notes – Herbaceous, Aquatic and Bergamot. 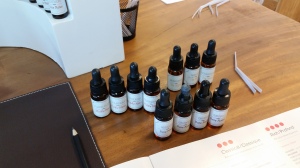 I then got to play around with creating a perfume – I made three different samples, and then had to decide whether I preferred a light perfume or something a bit heavier. When I’d decided, they made me a bottle of perfume and packaged it for me.

They also kept my perfume on file so that if I ever want to reorder it, they’ll know what to create.

The lady told me I shouldn’t open the perfume for three weeks, to give the molecules time to settle.

After I was finished, I tried to find Harry (he works at the Ritz-Carlton) but it took ages to get hold of him, and by the time I managed he was just going into a meeting. In the 10 minutes that I waited in the lobby of the hotel trying to call him, I was bitten at least eight times on my lower legs by mosquitoes!

I got back to the Sofitel and finished off my packing, convinced that my suitcase weighed more than my luggage allowance of 30 kg. I checked out of my room at 6pm and went to sit with my aunt and uncle in their room.

I left for the airport at around 9pm. Luckily there was no traffic and I was there in about 20 minutes. I checked in – my bag weighed exactly 30 kg! And then I had time to kill and didn’t really know what to do with myself. So I went to the bookshop and browsed, and then decided to get some food at Last Wave – a restaurant/bar near the departure gates.

And finally it was time to board. I hoped the flight would be as empty as the one I flew in on, but no such luck. I couldn’t believe my holiday was already over and I was heading home to Dubai! I had an amazing time though – and Bali, I’ll be back 🙂