I got back from Bali on the 23rd morning. Similar to when I left, the passengers had to get on a bus after leaving the plane and were then taken to the terminal. I stood at the top of the stairway at 5am and was hit by a blast of cold air. I got on the bus, found a seat and sat down because I was feeling tired and lazy. Just as well, because the bus ride to the airport took forever. It felt like we were going around the airport in circles. I felt like one of the hostages in the movie Speed. We finally got to the terminal, I went through the e-Gate, collected my luggage, bought five bottles of champagne at Duty Free and went home. I was so happy to be home, and back in my own bed. I’d missed my pillows! I passed out for a few hours until lunch.

That evening, a friend had invited a few people over for mulled wine and mince pies. We got to her place in The Springs at about 7pm. It was nice to see everyone after my trip, and we sat out in the garden, sipping wine and chatting. I left at around 9.30pm – I was exhausted and a bit jet-lagged.

On Thursday, I went to the Dubai Mall – I needed a Secret Santa present for Christmas lunch the next day. Once I’d picked that up I went back home. I had a load of work to do and was starting to panic about how I was going to get it all done before the deadlines. I stayed in that night.

I spent Christmas Day with some friends at their flat in Business Bay. I got there at around 2pm and we had lunch at 4pm. It was also my fourth anniversary of being in Dubai – I can’t believe how quickly the time has gone! 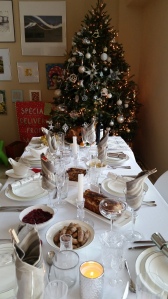 There was so much food! Prawn cocktail to start with, and then turkey, pork shoulder, roast potatoes, stuffing, brussel sprouts, pigs in blankets, and I’m sure there was more that I can’t remember. There was Christmas pudding and cheese for dessert. Not to mention the prosecco, champagne and wine that we all enjoyed. The weather was lovely too – and we spent the rest of the afternoon and evening sitting on their balcony, watching the full moon move across the sky (and watching random YouTube music videos). 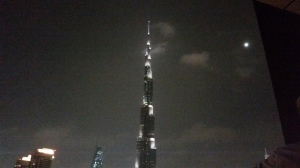 I got home at around 11pm. It was a long day, but it was really fun.

I went to the Dubai Mall on Saturday as I was meeting some friends at Vogue Cafe in the Shoe District for tea.

On Sunday, I decided to try out a new yoga studio at Village Mall. It was really nice and I ended up buying a package for 15 classes.

I had my usual piano lesson on Monday, but that was all I did that day. All I’d been doing otherwise was working. I’d hoped that as my UK clients were closed for the holidays, there’d be no more work coming in over the holidays and I could catch up properly, but I didn’t realise that their Indian offices would still be open and send me things to work on! It was good though – I kept my head down and got on with it.

I’d been invited out for lunch on Tuesday. I wasn’t keen on going but I had some friends visiting Dubai who would be at lunch so I went anyway. Lunch was at Apres in Mall of the Emirates. I got there at 1pm (which was the time on the invitation) and there was nobody there, not even the two hosts. There was also no table set up for 10-12 people so I asked the waitress at the door whether they had a booking under either of the hosts’ names. ‘For today, ma’am?’ Well, yes, I’m here, aren’t I? She looked in her diary. ‘Oh yes, 1pm for 12 people.’ So, where is the table? ‘Oh, we didn’t know if they wanted smoking or non-smoking.’ You have the number there so why didn’t you call to confirm? ‘Yes, ma’am.’ The woman was irritating. But what irritated me more was that the hosts should have been dealing with the lack of a table and not me. I got the table sorted and sat down. I asked the waiter for a bottle of water (which never arrived). At about 1.15pm one of the hosts arrived – she’d had errands to run in the mall which was why she was late. Good grief – couldn’t she have done that later? Anyway, people started arriving – we were nine girls in the end – and lunch seemed to go on forever. The service was awful. I would never go back there. At 4pm I made my excuses and left – the others seemed quite happy to sit there for longer but I had s*** to do!

I had a session with Pete on Wednesday and spent the rest of the day working.

On Thursday morning I went back to Eco Yoga Sanctuary for a Hatha Flow class. After that I decided to get my  hair done as I looked like a homeless person after the yoga class. It was also New Year’s Eve and I hadn’t decided what I wanted to do that night. My number one choice was to stay home. I’d been invited to a few places but I couldn’t face the thought of the traffic going Downtown and then getting stuck there until 4am. I could see it building up from the afternoon onwards. 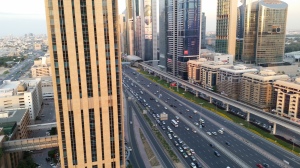 I ended up staying home. And I’m glad I did because soon after I’d had dinner, I saw a post on Facebook that said the Address Downtown was on fire. What?? I’d been hearing sirens for the last 10 minutes but assumed it was regular New Year’s Eve police controlling the traffic. I thought it was a hoax and then I checked Twitter. I couldn’t believe the pictures I was seeing. 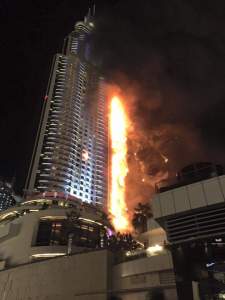 I felt sick – there were hundreds of thousands of people in that small area – and I couldn’t imagine how many people would be injured. I kept reading that there were no injuries but I just couldn’t believe that. Eventually, it was reported that there were 14 minor injuries – a bit more realistic, but still unbelievable in a way. I hoped everyone had managed to get out of that building in time. And then I heard that they were planning to go ahead with the fireworks Downtown. Next to a burning building? It seemed ludicrous. And people were still heading Downtown. Friends called from London and other places to see if I was OK – WhatsApp had stopped working! 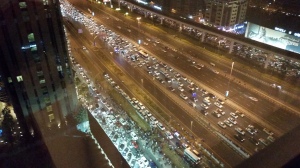 At about 10 minutes before midnight I made my way to the pool area of my building to watch the fireworks. The crazy thing I’ve noticed about people on New Year’s Eve is that wherever they are on Sheikh Zayed Road, they’ll abandon their cars and run to where they can see the Burj Khalifa and watch the fireworks. It’s like watching a disaster movie, although instead of running from disaster, they’re running towards the fireworks! 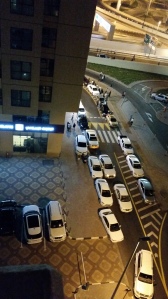 And then it was midnight. The Address Downtown was still on fire (but under control, they said) and the Burj Khalifa lit up. 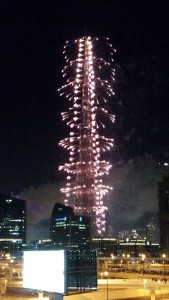 I’m so glad I stayed in.