I managed to do it but was really out of breath by the end of it!

I had a session with Pete on Monday morning. I started with a 10-minute warmup on the cross-trainer:

I did some stretches and Pete told me I’d be doing some heavy lifting and before each set of exercises I’d do 400 metres on the cross-trainer as quickly as I could.

I did the first 400 metres on the cross-trainer in about 2 minutes – my time got gradually slower as the session went on. Pete told me he expected me to be out of breath and sweating – and I was definitely both those things. The first group of exercises was:

I used the weights machines for both those exercises and did three sets with a 40-s rest between sets. The weights were so heavy for the chest press that Pete had to help me lift the bar up and down. Doesn’t that defeat the purpose?

Anyway, I had some water and did another 400 metres on the cross-trainer. I couldn’t go as fast as I did the first time. The second group of exercises was:

I did three sets of that and was really ready to go home after that! I even muttered ‘You’re fired’ when Pete told me to get back on the cross-trainer for the third 400-metre sprint.

I had some more water after that and did the third group of exercises:

I used the machines for those two exercises as well and did three sets with a 40-s rest between sets.

I woke up on Tuesday and was really sore – biceps, triceps, pecs, hamstrings. I could barely move. I went back to the gym though, and did Week 5 Day 2 of the 10k Runner app:

I had planned on going to a yoga class on Tuesday afternoon but as I was cooling down on the treadmill I felt so tired. All I wanted to do was sleep! After I’d showered and had some lunch I realised there was no way I was going anywhere that afternoon.

I was still sore on Wednesday, especially my upper body. I had a session with Pete that morning. I began with 500 metres on the treadmill – I walked for the first minute and then ran until I got to 500 metres. I asked Pete why I was only doing half the warmup I normally do, and he replied saying I’d be doing the Cooper test during the session and would need to conserve my energy. Crap, I really didn’t like the sound of that.

I did some stretches while Pete explained that the point of the Cooper test is carried out to test a person’s lung capacity and is usually done by running as far as possible in 12 minutes. Pete also said that I’d be doing the test on the cross-trainer rather than on the treadmill, but at a resistance level of 8, as it would be easier to vary my pace on the cross-trainer. I finished with the stretches, but the Lebanese guy in the gym hadn’t finished on the cross-trainer (he had 13 minutes left) so I did the following group of exercises while waiting:

I had a quick drink of water and did two sets of the following abs exercises:

Between the two sets I had a water break. And the Lebanese guy had finished on the treadmill. I began my 12-minute Cooper test at resistance level 8. I thought it would be better to pace myself rather than sprint and tire myself out – so I tried to keep the speed between 9 and 10 km/h for the 12 minutes and managed to get to 1.96 km. Pete said we’d repeat the test before my trip to London to see if there was any improvement.

I did another set of the abs exercises and had some more water.

I finished the session with 4 minutes of Tabata:

I did some stretches after that and was done. I was exhausted and needed a nap.

I woke up on Thursday and my obliques were surprisingly sore! I went back to the gym and started with one set of the abs exercises I’d done the day before:

I managed to do both 8-minute runs at 7.5 km/h – which turned out to be exactly 1 km each – so, not including the cool down, I did 3 km in 26 minutes. I had some water and did another set of the abs circuit. I was tempted to stop after two sets but then decided I may as well do all three!

And I didn’t work out over the weekend. 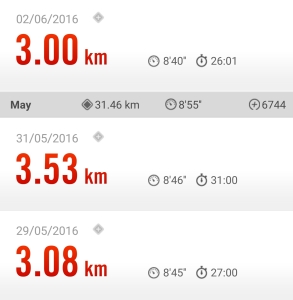 Low point of the week? I still haven’t done any yoga.

High point of the week? I worked out five times! And three people over the weekend told me I’d lost weight.

Weight loss? Up and down, as usual. According to my Libra weight tracking app, I’ll hit my goal of 65 kg some time in early 2018. 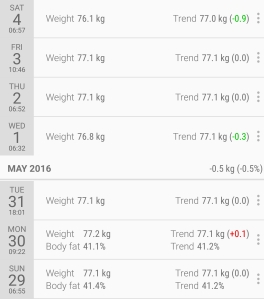