Have a great week 🙂 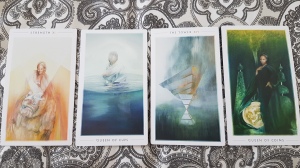 Strength – showing strength – having stamina, being a rock; being patient – refusing to get angry, taking time, maintaining composure; being compassionate – understanding what others are feeling, giving others lots of space, being kind; achieving soft control – guiding indirectly, being able to influence, demonstrating the strength of love

Queen of Cups – being loving – dispelling anger and hate, having infinite patience; being tenderhearted – being kind and gentle with all creatures, feeling what others are feeling; being intuitive – being guided by the heart; being psychic – having a well-developed sixth sense; being spiritual – having reverance for all life, appreciating the deeper meanings of life

Queen of Coins – being nurturing – giving love and support, making people feel better; being big-hearted – giving freely and abundantly; being down-to-earth – handling problems matter-of-factly, taking a simple and sensible approach; being resourceful – making a little go a long way, being handy and versatile; being trustworthy – being loyal and steadfast, keeping confidences and secrets 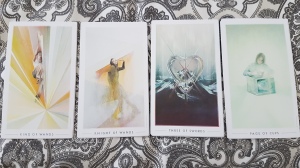 King of Wands – being creative – having natural artistic ability, being original and inventive; being inspiring – setting an example others want to follow; being forceful – carrying authority naturally; being charismatic – magnetically attracting others, naturally becoming the focus of attention; being bold – being intrepid, daring to stand and be different

Knight of Wands – being creative – taking a novel approach, finding a new area of self-expression; being enthusiastic – getting excited, being passionate; being confident – stretching your envelope, moving beyond doubts; being courageous – taking assertive action, overcoming a fear

3 of Swords – feeling heartbreak – having your feelings hurt, getting some unsettling news, being disappointed; feeling lonely – feeling lost, being separated, wandering far from home; experiencing betrayal – being let down, breaking your word, finding your trust misplaced

Page of Cups – being emotional – being moved or touched, letting your feelings show, being sentimental or romantic; being intuitive – acting on a hunch, trusting your gut reaction, having a psychic experience; being intimate – starting or renewing a love affair, getting closer to someone, solidifying a friendship; being loving – forgiving yourself, forgiving someone who has hurt you, mending a broken relationship 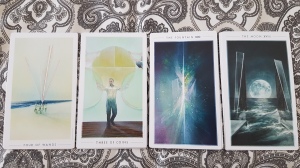 3 of Coins – working as a team – finding all the needed elements, functioning as a team, cooperating; planning – organising resources, reviewing beforehand, being prepared; being competent – getting the job done, meeting your goals, being up to the job

The Fountain (this card is unique to the Fountain Tarot deck) – oneness, a moment of cosmic clarity, fully ‘awake’, the end of seeking, enlightened being, surrender to that which you are, whole and perfect