My flight from Dubai landed at Denpasar airport about 20 minutes ahead of schedule (which was 10pm). We taxied down the runway and then we stopped. It was dark outside so there wasn’t much to see. About 10 minutes later there was an announcement to say that we’d stopped because there was a large snake blocking the runway – so they were waiting for someone to come and move it off the tarmac. So we waited. Another 10 minutes later there was another announcement to say that they’d only just managed to explain to the control tower what the problem was. The front view camera had been switched off so I couldn’t see what was going on. When we finally started moving again (we’d been stuck there for 30 minutes), I could see all the security personnel, police cars and even an ambulance involved in this situation – there were at least three emergency vehicles there. I wondered how big this snake was??

As I got into the new airport, there was a man waiting for me with my name on a signboard. I’d asked the hotel if they could arrange a car for me – they said they could and that they also offered a fast-track immigration service. Yes, please! So there he was. He took my passport and took me to the diplomatic queue (there was no queue at all). I didn’t know that UK passport holders no longer had to pay $25 – the 30-day visa on arrival is free now. He then took me to collect my luggage and through customs. I was stopped at customs – they opened my suitcase and rummaged around. I don’t even know what they were looking for as I had nothing even remotely interesting in there.

The immigration man then took me to my car and driver. I was offered a cold towel and some cold water. It took about half an hour to get to the hotel and on the drive I could see how many new hotels and restaurants had opened since my last trip three years ago.

I was spending two nights at the Luna2 Studiotel in Seminyak before heading to my yoga retreat, also in Seminyak. I checked in and was taken to my room on the first floor. All the rooms are named after places on the London Monopoly board – mine was called Picadilly on One: 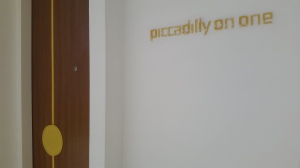 All the rooms are studios – and even the basic option (like mine) is pretty big.

While the curtains are pretty funky, they don’t really keep the light out – as I discovered in the morning. From my balcony I had a view of the pool:

The sunbeds are covered as it was drizzling.

I made it to breakfast at the restaurant, Orbit, just before 11am – I had some scrambled eggs and smoked salmon, fresh coconut water and a cappuccino. After that, I walked up to the main road, about 10 minutes away, dodging a couple of motorbikes, to change some money and get a SIM card for my phone. It was overcast and muggy and I went into the first Circle K and asked where I could get a SIM card. One of the guys said he’d take me to one of the shops nearby to get one. Once I’d sorted that out (and I’m pretty sure I got seriously ripped off), I started to walk back to the hotel – and it started raining again. I suppose it is the rainy season! But half an hour later, it had cleared up again.

I relaxed in my room for a while and then went down to the pool at about 2.30pm.

I read for a while and then ended up chatting to an Australian lady. She was using the sunbed next to mine and we just struck up a conversation. She was there with her husband and little girl so I ended up meeting them too. She went in at about 5pm and I couldn’t decide whether I was hungry or not – in the end I decided to go for a fresh juice.

I had the Green Machine and then went back to my room. I ordered an in-room massage for 6.30pm which I thoroughly enjoyed! I felt like passing out after that but it wasn’t even 8pm.

I went down to Orbit for dinner. I was the only person there! Just as well I had my book with me. I skipped the starters and went straight for the ‘scaled’ gold band snapper with zucchini ribbons and cherry tomatoes.

It was excellent. I decided to have dessert: truffled Brie with walnut crackers and truffle honey. Wow – it was amazing. The food and the service at this hotel are outstanding, I have to say.

I was back in my room by 10pm but didn’t get to sleep until much later.